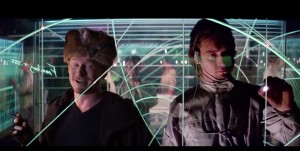 Veteran actor, funnyman and political activist, Zack Ward, released the pilot of his new “Darth Farkus” series on New Year’s Day 2016. Early viewers noted the subject matter and were especially tickled and then curious about the last 30 seconds or so.

Commenting on this, Zack says:

“Dear Adam (Silver). I know times are rough financially and you’re scared. We’re all scared. But, this is when we, as Americans, stand up for what matters most. We can not give in to the fear. We cannot sacrifice the future of those things we hold most sacred just for a penny tomorrow. Sports exemplify everything we are and hope to be. Do not pimp our past because you are afraid of the future.Believe in America. Believe in us as a people. Necessity is the mother of invention and Americans are Bad Mothers when it comes to changing the world. Don’t be a coward. Lead in a way that doesn’t require us to sacrifice our integrity for a dollar so we can look our children in the eyes and tell them they still have heroes. Be our hero! Lead by example.”