I’m not sure about you D-Heads, but I am so ready for Disney’s new film Wreck-It Ralph! Being a video game nerd when I was younger and going to, and placing well, in the Nintendo Championships in 1989, I am excited for a film tying together so many classic games into a fun filled film.

As you already know as well, we LOVE Disney Music and with that, the film is getting an Official Soundtrack Release this month. 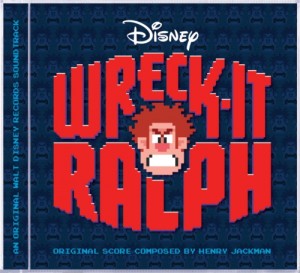 Classically trained composer Henry Jackman was called on to write the score for “Wreck-It Ralph,” helping to shape the film’s diverse worlds with music. Jackman researched arcade games and incorporated their classic sounds into the score, bringing the arcade and its individual games to life. According to Jackman, the score was driven by the story, which allowed him to tap his classical roots, too. “When something emotional is developing, it actually opens the door to the orchestral score without it feeling imposed,” he said.

Underscoring the chaos and excitement of Hero’s Duty, the first-person shooter game, GRAMMY®-winning artist Skrillex wrote the game-play music, “Bug Hunt,” hand-picking Netherlands’ producers/DJs/videogame soundtrack composers Noisia to remix the track for the album. “The mood of that game world is high-energy and futuristic. I make music with many different colors of the emotional spectrum—this reflects a more aggressive side of my music.”

Owl City (“Fireflies,” “Good Time”) provides an upbeat and story-driven cap to the film with “When Can I See You Again?” According to singer/songwriter/instrumentalist Adam Young, the song offers a bit of an emotional tug-of-war. “It’s a very bouncy, happy, uplifting song, but there’s a bittersweet part of it, leaving a key relationship in the film open-ended.” The music video was directed by Matt Stawski (Cee Lo Green, Train, All Time Low) and creates the world of a classic 8-bit video game that seamlessly connects it to the world of “Wreck-It Ralph.” The video will premiere exclusively on VEVO Oct. 26.

ABOUT THE MOVIE
From Walt Disney Animation Studios and Emmy®-winning director Rich Moore comes “Wreck-It Ralph,” a hilarious, arcade-game-hopping adventure. For decades, Ralph (voice of John C. Reilly) has been overshadowed by Fix-It Felix, Jr. (voice of Jack McBrayer), the good-guy star of their game who always gets to save the day. Tired of playing the role of a bad guy, Ralph takes matters into his own massive hands and sets off on a journey across the arcade through multiple generations of video games to prove he’s got what it takes to be a hero.

On his quest, Ralph meets tough-as-nails Sergeant Calhoun (voice of Jane Lynch) from the first-person action game Hero’s Duty, and feisty misfit Vanellope von Schweetz (voice of Sarah Silverman) from the candy-coated cart racing game, Sugar Rush, who may just be his first real friend. But everything changes when a deadly enemy is unleashed, threatening the entire arcade and Vanellope herself. Ralph finally gets his chance to save the day—but can he do it in time? “Wreck-It Ralph” crashes onto the big screen on Nov. 2, 2012, in Disney Digital 3D™ in select theaters.

The Wreck-It Ralph original motion picture soundtrack will be available wherever music is sold on Oct. 30, 2012. The album is currently available for pre-order at Amazon.com