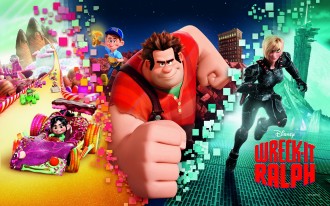 One thing Disney is great at doing is marketing. And with the recent success of the newest feature film, Wreck-It Ralph, Disney has been hard at work expanding that universe of video games created for the film.

Disney has now officially released a new App where you can play Fix-It Felix Jr., Sweet Climber, and Hero’s Duty. You can experience these games that made the universe of the film so rich in color and feel.

In addition you can also expand from those games and read the Official Storybook of Wreck-It Ralph that tells us the story before the story in this prequel book. This book tells us the pre-story of Ralph and the games as well as gives the read a full 22 pages of interactive comic book fun. Disney’s first attempt at this style of book was with their Brave Comic book, and this new Ralph one is proving to be just as fun, exciting and expands our love the new film.

The Wreck-It Ralph Deluxe Storybook are in the APP Store Starting at $1.99 – $6.99. They are fun and worth trying out.