What are the Guardians of the Galaxy?

HomeWhat are the Guardians of the Galaxy?
Jonathan
Walt Disney Company, Walt Disney Pictures
No Comments

Buying Marvel has proved to be a boon for Disney, with Avengers becoming one of the highest grossing films of all time.  That success has led to speculation that Iron Man 3 will receive a similarly huge opening as it sets off Phase 2 of the Marvel Films plan.

The Guardians of the Galaxy are Coming

It could be argued that the success of Marvel’s Phase One movies was due in part to them building the franchise around characters that the average movie-goer would have at least a passing familiarity with.  You might not know the stories of Tony Stark, Steve Rogers or Donald Blake, but you’ve likely at least heard of and/or seen Iron Man, Captain America and the Mighty Thor.  Lesser known Marvel characters like Nick Fury, Hawkeye, Black Widow and Maria Hill were introduced via movies about their more famous friends.

But very soon, the heads of Marvel Studios will be taking their first big risk with the release of James Gunn’s Guardians of the Galaxy movie.  There is at least a chance audiences might have heard of Hawkeye or Nick Fury prior to the movies, but virtually no one outside of a comic book store knows who or what the Guardians of the Galaxy are. 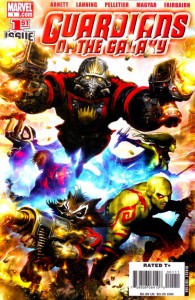 The Guardians of the Galaxy

The original iteration of the Guardians was created in 1969.  A team of aliens from different planets gathered together in the 31st Century to save the Galaxy from a race of alien conquerors known as the Badoon.  They occasionally recruited their inspiration, the Avengers from our time to help them. Eventually the Guardians of the Galaxy received their own ongoing comic in 1990 and ran for 62 issues (roughly 5 years).

The movie will be based loosely on the last Guardians of the Galaxy comic, established by modern legend Keith Giffen and written as an ongoing series in 2008 by the team of Dan Abnett and Andy Lanning. This version of the Guardians was also comprised of aliens from different races, but was based in our time.  The team was assembled to run a suicide mission during an intergalactic crisis. When it was over, the team reassembled with new members.

The Guardians are led by Peter “Starlord” Quill, a half-human astronaut and former space adventurer.  The team changed members multiple times in the nearly 2 years that the book ran.  The movie will feature several core members of this group.  Gamora is a green skinned assassin, known far and wide as the deadliest woman in the galaxy.  Drax the Destroyer is a green, hulking (no pun intended) brute and a feared warrior.  Rocket Raccoon is… well, a raccoon. Or a space raccoon.  He likes beer and big guns.  Groot is a sentient tree and best buddy of Rocket.  If he is killed, he can come back to life as long as a single splinter of Groot is kept alive and intact.

Obviously this story is pretty far from the relatively grounded Avengers.  The reasons for making them into a movie are probably two-fold.  Its probable that someone at Marvel Studios read Abnett and Lanning’s amazing GotG comic.  It was well-received and beloved by its fan. GotG is actually one of several comics that was cancelled by Marvel for un-revealed reasons.

However, this version of the Guardians also has ties to Thanos, the giant purple villain at the end of Avengers.  While it’s unclear whether any of the comic back story will be used in the movie, two of the Guardians have a personal history with Thanos.  Gamora was adopted and trained by Thanos to a weapon.  Drax was human, but after his death he was reincarnated specifically to kill Thanos.

It’s a safe bet that the Guardians of the Galaxy movie will reveal more about Thanos and what his plans are for Earth.

Guardians of the Galaxy is set to premiere in 2014. If you would like to know more, contact you local comic shop to see what is available regarding the Abnett and Lanning series. Marvel Comics has released a new Guardians comic in response to the upcoming movie, but it’s terrible.