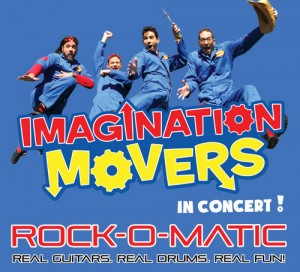 The Emmy-winning Imagination Movers will embark on their first U.S. concert tour in two years to support their new CD/DVD release “Licensed to Move.” The first series of dates will begin March 20 in Wayne, NJ and finish on April 12 in Sellersville, PA. There will also be stops in Boston; Hartford, CT; Fall River, MA; Plymouth, NH; Port Washington, NY and Wilmington, DE.

Over the last decade, fans in North America, Europe and Asia have discovered that the Movers deliver an exhilarating and exciting rock concert experience.

Kids and parents sing along with the Movers’ hooky choruses, learn ridiculous dances and marvel at the sight of confetti cannons, giant smoke rings, enormous balloons and roll after roll of flying toilet paper.

The new “Licensed to Move” CD/DVD was made possible by contributions to the Movers’ highly successful PledgeMusic campaign. In the process, the Movers connected with fans in many creative ways. During the “Meet the Movers” tour, the Movers are offering more opportunities for unique fan access. Concert tickets will only cost $25 per person. For an additional $25, fans can attend a special meet-and-greet party where they’ll be able to chat with the band, take photos and get autographs. A limited number of fans can even reserve a spot at a special “Friends of the Movers” sound check event in each theater.

“We couldn’t do what we do without our fans,” says “Mover Dave” Poche. “This tour … is designed for us to have fun spending time together. It’s basically going to be a party.”

Order your tickets today at imaginationmovers.com.

The Movers have performed at the White House for two presidents and on “Good Morning America,” “The View” and “Live with Regis and Kelly.” Don’t miss your chance to see this crowd-pleasing event live at a theater near you!