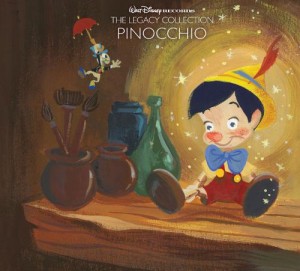 “Pinocchio” was a groundbreaking achievement in the area of effects animation, giving realistic movement to vehicles, machinery and natural elements such as rain, lightning, snow, smoke, shadows and water.

The film was released to theaters on February 23, 1940. “Pinocchio” became the first animated feature to win a competitive Academy Award®, winning two for Best Music, Original Score and for Best Music, Original Song for “When You Wish Upon A Star.” The beloved ballad became an instantly recognizable cornerstone of Disney’s entertainment legacy. In 1994, “Pinocchio” was added to the United States National Film Registry as being “culturally, historically, or aesthetically significant.”

Disc One of The Legacy Collection Pinocchio features the songs and score from the restored original motion picture soundtrack. The album’s extensive liner notes were written by Jim Fanning, an internationally published Disney historian, writer and editor, who has written for many divisions of The Walt Disney Company.

Disc Two features The Lost Chords of Pinocchio – 3 new recordings (“Rolling Along to Pleasure Island,” “No Strings,” and “As I Was Sayin’ to the Duchess”) brought to life the way they would have sounded in 1940. Disc Two also includes 5 bonus tracks performed by Jiminy Cricket (Cliff Edwards) from the original “Mickey Mouse Club.” Russell Schroeder provides an overview of The Lost Chords project as well as background on each song. Schroeder worked as an artist for The Walt Disney Company for 29 years. In addition to Disney’s Lost Chords Volumes 1 & 2, Russell authored several other books including Disney: The Ultimate Visual Guide, and Mickey Mouse: My Life In Pictures.

Walt Disney Records The Legacy Collection Pinocchio 2-disc set is available for pre-order at Amazon: http://smarturl.it/lcpama1 and at Disney Music Emporium: disneymusicemporium.com.  For more information on Disney Music Emporium, please visit, DisneyMusicEmporium.com become a fan at Facebook.com/disneymusicemporium or follow us at Twitter.com/DisneyMusicEmp.