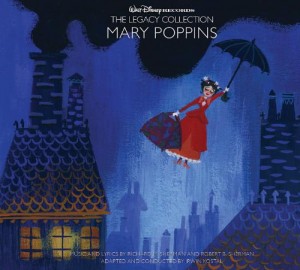 Walt Disney Records’ newly created line of collectible CDs, Walt Disney Records The Legacy Collection, celebrates the anniversaries of Disney’s most cherished and classic films that have been enchanting audiences for generations.

The label honors one of the most celebrated and beloved soundtracks of all time with the 50th anniversary release of the Walt Disney Records The Legacy Collection Mary Poppins on August 26, 2014.  The Mary Poppins collection features over 2½ hours of content, including the original soundtrack, The Lost Chords – previously released demos and newly recorded versions, plus cast and filmmaker interviews and a collectible 20-page booklet.  Also included are excerpts from the historic “Mary Poppins” story meetings in 1961 with author P.L. Travers, as heard over closing credits of the critically acclaimed film “Saving Mr. Banks.” Grammy® winning producer, Randy Thornton contributed extensive liner notes.

First released in 1964, the Mary Poppins original motion picture soundtrack featured 14 original songs by legendary Disney songwritersRichard and Robert Sherman. The soundtrack was the #1 album for 14 consecutive weeks in 1965, maintaining the #1 position that year longer than the Beatles (Beatles’ 65, Beatles VI, and the Help! soundtrack), Elvis Presley (Roustabout soundtrack), The Rolling Stones (Out of Our Heads) and The Sound of Music soundtrack. “Mary Poppins” won five Oscars®, two of which the Sherman brothers received for “Chim Chim Cher-ee” and the film’s original musical score.

The second disc features 8 pre-demo recordings, The Lost Chords tracks (7 demos and 7 newly recorded and fully orchestrated versions of those demos), plus liner notes by Randy Thornton and author Russell Schroeder. Over the last 20 years, Thornton has overseen the re-mastering, restoration and preservation of Disney’s classic soundtracks. Thornton explains The Lost Chords:  “As part of The Legacy Collection we’ve included the composers’ original demo recordings for seven songs intended for “Mary Poppins” – some dating from the earliest stages of the film’s development. In addition to these historic demos, we’ve had the unprecedented opportunity to collaborate with Richard Sherman to record and present these songs in a way they may have sounded if they remained part of the film – fully orchestrated versions we hope finally give voice to songs that have remained silent for 50 years.”

Russell Schroeder provides an overview of The Lost Chords project as well as background on each song. Schroeder worked as an artist for The Walt Disney Company for 29 years. In addition to Disney’s Lost Chords Volumes 1 & 2, Russell authored several other books including Disney: The Ultimate Visual Guide, and Mickey Mouse: My Life In Pictures.

The third disc of The Legacy Collection Mary Poppins begins with over 40 minutes of excerpts from the seminal story meetings between Mary Poppins author P.L. Travers, the Sherman brothers and screenwriter Don DaGradi as they discussed the original outline for the movie, including the music. Also included is a 17-minute Hollywood Spotlight Microphone interview with Julie Andrews, Dick Van Dyke, the Sherman brothers and Irwin Kostal (who arranged the music for “Mary Poppins,” “West Side Story” and “The Sound of Music”). The third disc concludes with a 1989 interview with Richard and Robert Sherman as they discuss their work creating the magical music of “Mary Poppins.”

The CD booklet also includes a sampling of visual development art from the film and sketches from the P.L. Travers story meetings.

The third release from The Legacy Collection will celebrate the 55th Anniversary of “Sleeping Beauty” and will be available on October 7, 2014.  The 2-disc set will include the songs and score from the film, rare behind-the-scenes recordings, plus The Lost Chords of Sleeping Beauty.

Walt Disney Records The Legacy Collection Mary Poppins 3-disc is available for pre-order at Amazon: http://smarturl.it/lcmpama1 and at Disney Music Emporium: disneymusicemporium.com and will be available on August 26, 2014.  View The Legacy Collection Mary Poppins product here: https://www.youtube.com/watch?v=C84WzA9NsLo.  For more information on the Disney Music Emporium, please visit, DisneyMusicEmporium.com become a fan at Facebook.com/disneymusicemporium or follow us at Twitter.com/DisneyMusicEmp.