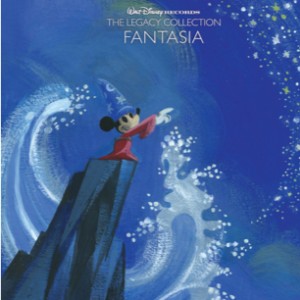 In the 75 years since its release, “Fantasia” has been bringing the beauty of animation and music together for audiences in a way only Disney can do.  Now, the soundtrack for the film has been released for all to enjoy.  “The Legacy Collection: Fantasia” 4-disc set includes all of the original music by Leopold Stokowski, a digital re-recording by Irwin Kostal, and more.

Disc 1 will immerse you in a score of music performed by the Philadelphia Orchestra starting with “Tocatta and Fugue in D Minor, BWV 565” composed by Johan Sebastian Bach and ending with “The Rite of Spring” composed by Igor Stravinsky.  Continuing with Disc 2 is the second half of the film’s music, including “Night on Bald Mountain” by Modeste Moussorgsky, and some additional bonus tracks, such as the Sterling Holloway reading of “The Sorcerer’s Apprentice .”

Discs 3 and 4 follow the same format as the previous discs, but this time with the digital re-recordings performed by the Disney Studio Orchestra and Chorus.  As a bonus on Disc 4, a reading by Sterling Holloway of “Peter and the Wolf” can be enjoyed.

Every piece from the sweeping score in the film is included on these discs in performance order for all to enjoy.  The wonderful thing about these selections is that they stand alone from their animation, so they can be appreciated with or without the film before you.  A gem among gems, it is a worthy addition to any Disney and/or music fan’s collection.

Get your copy at the disneymusicemporium.com/the-legacy-collection/