Walt, Bing, Ichabod and the Headless Horseman: How Disney’s Classic Came to Be and the Real Life Legend

HomeWalt, Bing, Ichabod and the Headless Horseman: How Disney’s Classic Came to Be and the Real Life Legend 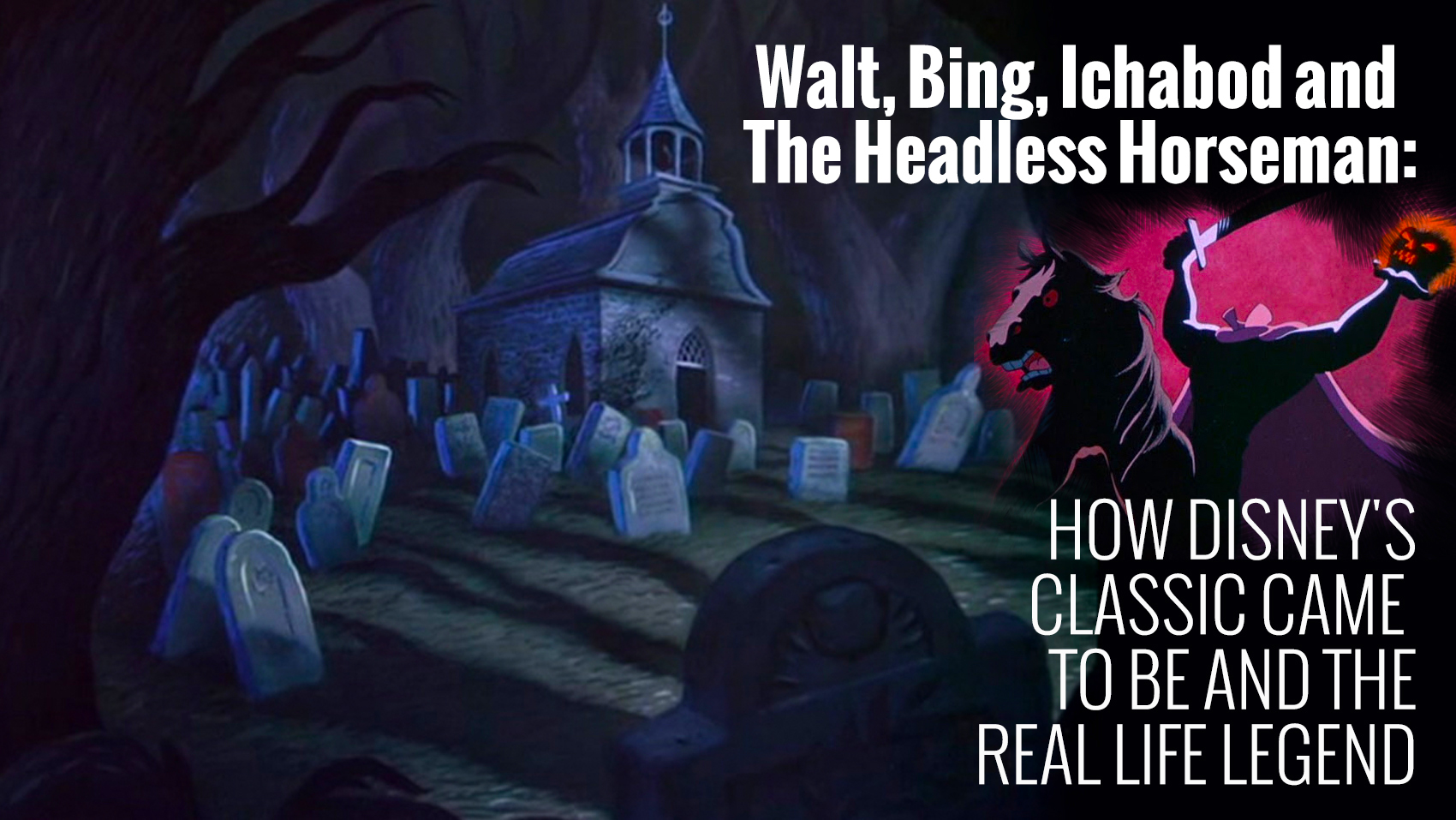 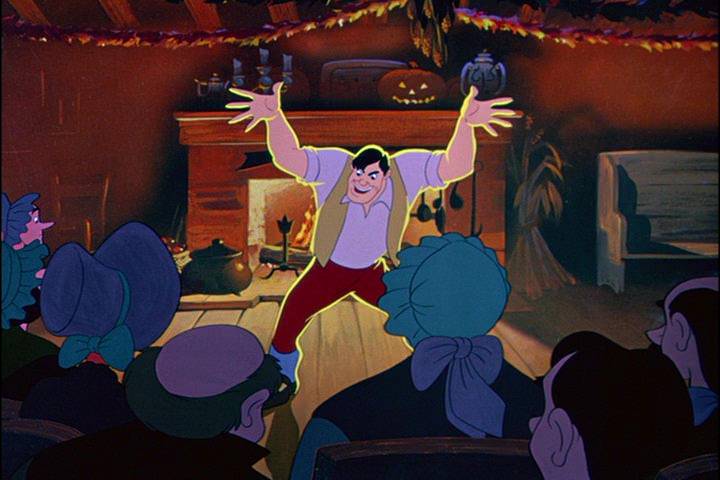 Nothing says Halloween more than a great animated classic. Alongside the perennial staple It’s the Great Pumpkin Charlie Brown, Walt Disney’s The Legend of Sleepy Hollow is a must watch every year. But this 1949 classic has many fun facts and mysteries that you may or may not know coming into the Washington Irving tale. So let’s head out to the backlot at the Disney Studios and for a moment act like we are living in that golden age of animation. 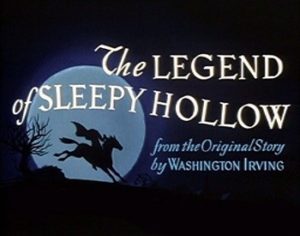 The Legend of Sleepy Hollow is a great tale of spooks, frights and superstition. Washington Irving told the tale set in Sleepy Hollow, New York of the headless man seeking out a dome of his own. Now the legend goes deeper than that as the tale is based on a story from the Revolutionary War, were the so-called soldier had his head blasted off from a cannon ball on the battlefield. It was told that his body was carried off the field but the head was a lost cause and left behind. This all took place around Tarrytown, New York. And to add to the superstition, Ichabod Crane was a real life inspiration.

Ichabod was an army man who met Washington Irving in New York in 1814 and he was part of the great War of 1812. One can only guess that this was how the story of the schoolmaster came to be. But then we can fast forward to 1946 when Walt Disney wanted to make a full length feature film based on the Irving story that continued to gain in popularity.

The 1949 classic The Legend of Sleepy Hollow we all know didn’t have enough source material to become that full vision Walt wanted. So instead it was combined with another Walt Disney Classic, The Wind in the Willows. Together they went on to get released as a double bill with both animated sequences following into the next much like Melody Time and Fun and Fancy Free did.  And so The Adventures of Ichabod and Mr. Toad came to be.

Now every Disney classic needs those animators to make the magic happen and this production had every single one of Walt’s Nine Old Men working on the piece. That brings something special to the mix and I believe it what gives it the lasting power it has to this day in the animated sequences, style and soundtrack. And speaking of the soundtrack, that wonderful off beat whistling you hear Ichabod doing in the hollow as he tries to stay calm leaving the party. Well you can thank a Disney Veteran of over 27 years, Mr. Oliver Wallace. He was not only the composer of the score for The Legend of Sleepy Hollow but he recorded his own whistling to contribute to the straight guy routine Ichabod had to pull off. And as lovely as the score is to the film, we can’t forget those wonderful lyrical songs.

We often find ourselves singing along to the tune of The Headless Man and long before Walt decided to have a full narrator to the work of art, he pulled in one of his trusted sources, the man we all know as the voice singing, You’re a Mean One Mr. Grinch, as well as telling us we are great as Tony the Tiger. Yes, Thurl Ravenscroft originally sang the tune The Headless Man and with his deep voice and bass to it, it makes for once fun version of the song. But the one we all recall so vividly is Bing Crosby’s rendition of the Headless Man track. Bing went on to be the narrator of the entire section The Legend of Sleepy Hollow and sang all the tunes to go along with it. This also marked the absolute only time Bing Crosby and Walt Disney collaborated on anything, although it remains one of Bing’s most memorable pieces. 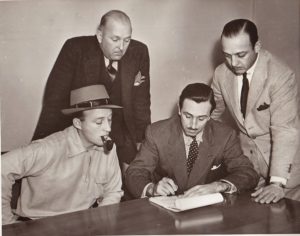 Walt disney and Bing Crosby Only Collaborated One Time

Since the film was released in 1949, Bing covered it a variety of times on LPs, and on his weekly Radio Program. And other artists such as Kay Starr at the time did her rendition of the track as well. There is even an alternate version the Disney Happy Haunting Sing Along DVDs.

If there is one thing we all love it was when these animated classics made their way into our homes on the Wonderful World of Disney with our Uncle Walt introducing them. It was in these moments we got to hear and see Walt tell us little snippets, quotes, and add this special special to the films we already love. And in 1955, The Legend of Sleepy Hollow made it’s television mark on the Disneyland TV show. During this time Uncle Walt was there telling us about Washington Irving, The Headless Horseman and he even introduced a long lost rare 14-minute segment that was fully animated about the life of Washington Irving. It is a hard one to find and one can only wish they will release it on DVD or Streaming in the future, but you are able to see some of it online on YouTube, but not the full animated short on Irving. 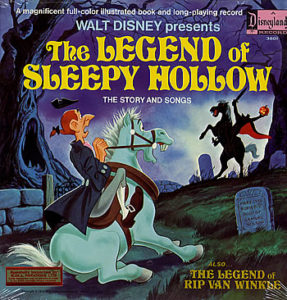 With Halloween just around the corner, it’s time to read the story, listen to the original Disney LP, watch the classic and make your way over the bridge and out of the woods to save your own head. And maybe while you are at it, you can stop at The Sleepy Hollow Refreshments at the Magic Kingdom in Walt Disney World and get yourself an Ice Cream Cookie Sandwich to take away the stress of walking late at night through the Hollow.

Happy Halloween and Beware of the Headless Man!