Today in 1941, the World Watched an Elephant Fly as DUMBO Premiered 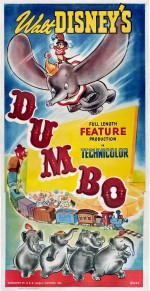 A little bit of Disney history today for you D-Heads. Back in 1941, many things were going on in the world but Walt Disney let us all have a moment of joy as the animated classic DUMBO found its way to the big screen October 23, 1941.

The wonderful tale taught us the bonds of parent and child, strength in friends, and the courage to do the impossible.

The film has gone on to be a Disney Legend and park staple. Who doesn’t want to ride Dumbo as Disneyland or Walt Disney World’s Magic Kingdom? I know we all had it on our Must-Do list and even Stacey Aswad (a past guest on the show) would agree.

Recently the attraction has been moved to the new Storybook Circus area where Mickey’s Toon Town used to be and now has two attractions to make the wait a little shorter.

So in remembering a Disney classic character and song, toss the movie into your players today or just listen to it while working in our Lifetime of Disney Player on the homepage and let’s all remember the first time of seeing an elephant fly.