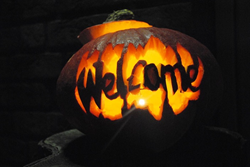 This new release brings together some of the most popular figures from Disney, videos games, and superhero movies

Believed to stretch back well over a hundred years, the art of pumpkin carving or creating “Jack-o-Lanterns is a time-honored tradition during Halloween. Typically seen as a simple face, the craft has taken on new life in the 21st century and become an art form all its own. Many people around the country put their skills to the test, carving life-like faces of celebrities, recreations of famous paintings, and more.

Taking to the spirit of the holiday season and the haunting atmosphere that comes with Halloween in general, Templatehaven.com is releasing a new set of popular designs to help people carve their pumpkins into a variety of characters.

Templatehaven.com is a proud provider of free Excel templates and wants to give people the opportunity to make their favorite character this year for Halloween. Each spreadsheet in this new release also features a detailed article that shows people how to make the figure using nothing but household items and the printed template.

The spokesman of the company, Mary Flynn, also commented on the company’s delightfully frightful new release.

“We like to think that what sets our site apart is the free-flowing nature and fun spirit of each template. They are colorful and effective. This new release brings together some of the most popular figures from Disney, videos games, and superhero movies and presents them in a way that anyone can use them and create perfect designs in their own Halloween pumpkins.”

The new release features a wide array of both characters and symbols that people can use freely.
People can expect to find popular characters like Frozen’s Elsa, Darth Vader, and even video game characters like Mario will be featured in the pumpkin carving templates. There is also a great selection for football fans as well. Their collection includes a large list of football team logos so people can celebrate their favorite team for Halloween too.

Flynn is excited to see what characters people will choose and how they will turn up. She wanted to assure people that the templates and the guide that comes with them makes it simple for people to achieve great results. Her team has tested the designs to be sure and they had turned out perfectly according to Flynn herself.

The team at Templatehaven.com also welcomes anyone that also just needs a template for their needs as well. Their entire site is free to anyone looking for quality Excel templates for any problem. Flynn and her staff want to wish everyone a Happy Halloween this year and hopes to see what people can do with their pumpkins.