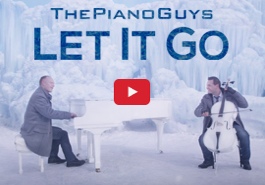 The Piano Guys “Let It Go” (from Disney’s Frozen) Knock It Out of the Park!

Utah’s favorite dads, The Piano Guys, release their latest self-made music video, “Let It Go.” Inspired by the landscape depicted in Disney’s film Frozen, The Piano Guys shot the video in a real winter palace built one icicle at a time, without using green screen.  Filming for the first in 4K, this new technology allowed them to capture the detail of the snow and definition of each icicle.  The arrangement of the song was created using ninety tracks of cello, piano and vocals – check out the video here! The Piano Guys version of “Let It Go” is also available for purchase as an audio track at all digital service providers.

“We all loved the movie Frozen and its single, “Let It Go,” says Steven Sharpe Nelson.  “There’s so much emotion, energy and drama packed into one tune.  With winter upon us, we thought it was the perfect song choice for our next video.”

The Piano Guys started making music videos together for fun and their “hobby” turned into a worldwide phenomenon when their self-made YouTube videos amassed millions and millions of views (over 350 million).  To date, the Utah-based classical-pop group has released three major label albums on Portrait/Sony Masterworks: The Piano Guys, The Piano Guys 2, and a holiday album called A Family Christmas.  The members of the group include Steven Sharp Nelson, Jon Schmidt, Al Van der Beek and Paul Anderson.

For more information on The Piano Guys and tour dates visit www.ThePianoGuys.com.