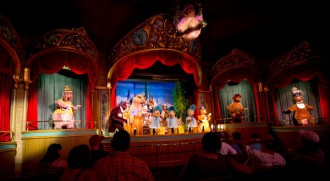 We all know the Country Bear Jamboree has had a makeover recently and some are for it, some against it. The main thing was the shortened show losing about 4-5 minutes from its original format. The other is losing two songs, one in which I will miss.

but instead of me rambling on about it, much like many other sites, The New York Times took a look at it and felt it was news worthy enough to do a write up and I think nailed just about anything else we would say about it.

But I will close in saying, I still wish the Country Bear Vacation Hoedown would make a return. Oh, well I still can wear my CAMP GRIZZLY tee to the parks right?