The Jungle Book Swings onto Blu-ray, DVD and Digital on February 11, 2014 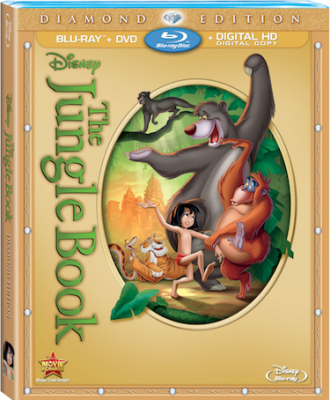 The Jungle Book Swings onto Blu-ray™, DVD and Digital on February 11, 2014

We all love that singing bear, and his human pal. The songs, the memories and magic. And now you can relive this Disney classic in Hi-Def Blu-Ray for your whole family to sing along with.

Meet the most unforgettable characters and embark on a thrilling adventure with Mowgli as he journeys deep into the jungle and learns “The Bare Necessities” of life from happy-go-lucky Baloo the bear. Meet Bagheera, the wise old panther, and crazy King Louie, the orangutan. But watch out for the cunning tiger Shere Khan and Kaa, the ssssneakiest snake in the jungle!

Explore your family’s wild side as you venture into The Jungle Book for extraordinary adventures and a heartwarming tale that celebrates the true meaning of friendship.

Voice Talent:
Phil Harris (Robin Hood, The Aristocats) as Baloo the Bear; Sebastian Cabot (The Sword and the Stone, Winnie the Pooh) as Bagheera the Panther; Bruce Reitherman(Winnie the Pooh and the Honey Tree) as Mowgli the Man Cub; George Sanders (All About Eve, Rebecca) as Shere Khan the Tiger; Sterling Halloway (The Aristocats, Alice in Wonderland) as Kaa the Snake; J. Pat O’Malley (Robin Hood, Mary Poppins) as Col. Hathi the Elephant/Buzzie; andLouis Prima (The Continental Twist Hey Boy! Hey Girl!) as King Louie of the Apes

Writers:
Larry Clemmons (The Fox and the Hound, Robin Hood, The Aristocats)

Ralph Wright (The Many Adventures of Winnie The Pooh, The Aristocats)

Ken Anderson (The Rescuers, The Many Adventures of Winnie The Pooh)

Vance Gerry (The Many Adventures of Winnie The Pooh, Robin Hood)

Music:
Music by George Bruns, Songs by Robert B. Sherman and Richard M. Sherman.
“The Bare Necessities” by Terry Gilkyson.”

Rated:
G in U.S. & Canada (Bonus materials are not rated)