TDG recently surveyed adult broadband users regarding the likelihood they would sign up for “a Netflix-like service from Disney” that included:

Respondents were randomly assigned one of three price points for the service, either $5.99, $7.99, or $9.99 per month. On average, 43% of adult broadband users are to various degrees likely to sign up, 27% moderately or highly likely to subscribe.

“Based on our research, Disney+ will enjoy strong early demand,” notes Michael Greeson, TDG President. “The amount of high-quality content being packed into the offering will make it not only appealing, but very sticky.” 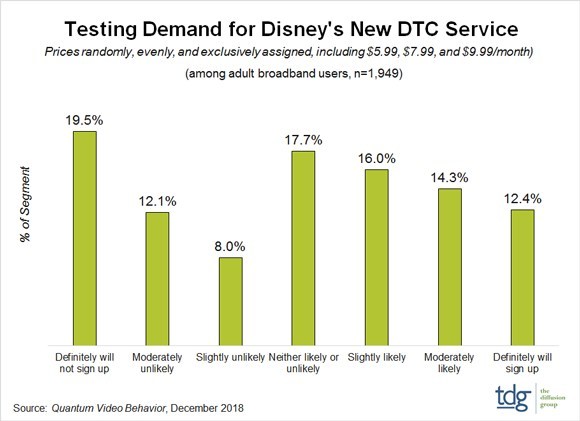 TDG views the launch of Disney+ as a major test for the direct-to-consumer model, as it differs from both subscription aggregators like Netflix and streaming ‘channels’ like HBO Now. “This is a major studio pooling what is arguably the largest library of high-value content on the planet to populate a single branded subscription service,” said Greeson. Notably, to further fortify the service, Disney is pulling select content from third-party SVOD providers like Netflix, suggesting a tribalism of sorts, with big-name studios reserving their best content for their own DTC services. As such, Disney+ will be under a microscope; a running case study of what DTC can be, and a real-time measure of what impact, if any, such tribalism may have on the value chain.

While Disney+ appeals to a wide range of consumers, interest varies within several key segments. For example:

This data is part of TDG’s eighth annual Video Behavior in the Age of Quantum Video, an annual survey of US connected consumers focused on multi-context, multi-device video viewing.