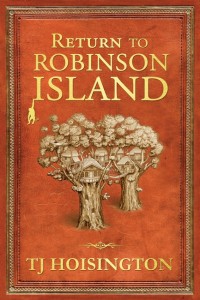 What ensures is a page-turning, action-packed adventure in which the Robinson Family must use survival skills and guerrilla tactics to safeguard their lives and island home. Weaved throughout the adventure story, is a thread of love and romance that becomes threatened by the betrayal of a family friend. The Robinsons know they will be required to use their knowledge of the island and ingenuity like never before. Will the Robinson Family survive this attack?

“Return to Robinson Island” begins 15 years after the Robinson family became shipwrecked on a remote island in the East Indies. The year is 1815. Ernest Robinson is 27 years old, and a 1st Lieutenant in the British Royal Navy. When Ernest’s commanding officer, Captain Charlie, is court-martialed for war crimes, Ernest is forced to tell the truth even if his testimony sends his former Captain to prison. Meanwhile, to the surprise of the Robinsons, a vast trove of treasure is found on the island, and the Robinsons soon find themselves in mortal danger when Captain Charlie vows to make the treasure his own.

“In 2003, I pulled out the 1960 Disney movie version of Swiss Family Robinson and watched it with my two sons, who were then three and five years old. When the movie ended, I tucked my boys into bed and gave them my love. After retiring for the evening, I awoke at one o’clock in the morning. In my minds eye, a new idea for a sequel was unveiled to me. It was like a vision. It was crystal clear. I always wondered what happen to the Robinson family, and now the answers were flooding my mind. So I got out of bed and began typing.” – TJ Hoisington

Find Out More At: swissfamilyreturns.com