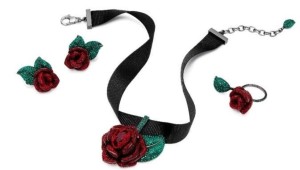 Celebrating one of the most beloved tales ever told, Disney’s Beauty and the Beast will hold its World Premiere in Los Angeles on March 2, in association with Swarovski. Beauty and the Beast (in cinemas March 17) is set to be a stunning cinematic event sparkling with thousands of Swarovski crystals, and this empowering new adaptation has inspired a bold and beautiful new jewelry line by Atelier Swarovski.

Jacqueline Durran commented: “Swarovski crystals were an important addition to the Prince’s costume and Belle’s yellow dress. For the Prince, crystals were a key element in recreating an 18th century coat – for the character to be wearing a coat covered with sparkling stones seemed the perfect way to represent his opulence. For Belle, the crystals were part of Garderobe’s finishing touch to the yellow gown, when added to the dress’s golden print they provided the final magical flourish.”

Academy Award-nominated set decorator Katie Spencer flew to Swarovski’s headquarters in the Austrian Tyrol to work with the company’s master cutters to manufacture the Bell Jar, based on Disney’s original design. The delicate frozen etching effect was carried out by an artisan craftsman in London. Decorating the top of its ornate dome is a bespoke-cut crystal finial shining with 543 facets. Further crystal embellishment to the set includes several music boxes made by Maurice, Belle’s father.

Katie Spencer commented: “Working with Swarovski was an incredible experience. Their crystals bring that extra touch of magic, especially to the beautiful centerpiece that is the Bell Jar. Swarovski’s technical team in Austria were so passionate, and their expert craftsmanship and dedication really shine through in the end result.”

The Atelier Swarovski collection will be available in stores and online from February 2017.
www.atelierswarovski.com
#beautyandthebeast #swarovski #atelierswarovski