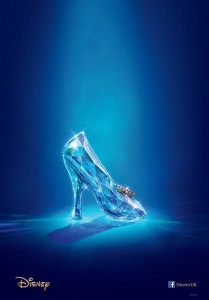 Swarovski has collaborated with the Academy Award® winning costume designer Sandy Powell to add some fairy tale sparkle to Disney’s new enchanting live action film Cinderella. Directed by Kenneth Branagh and starring Lily James in the title role, Cinderella is due for release on March 13th, 2015.

The suite of shimmering Swarovski-embellished costumes included in the lavish production features Cinderella’s iconic crystal slipper, which plays such a pivotal role in the classic fairy tale, as well as gowns, jewellery, accessories, hair, make-up, wigs and props.

Sandy Powell, a long time Swarovski collaborator, worked with technicians at the firm’s headquarters in Austria to design and realize the unique crystal slippers given to Cinderella by her Fairy Godmother, played in the film by Helena Bonham Carter. A team of eight worked on the development and creation of the shoes, taking approximately 150 hours and working on six versions before the final model was decided on. The dazzling slippers are hewn from solid crystal with a 6 inch heel and their dimensions are a dainty 186x75x196mm, featuring 221 facets in a light-reflecting Crystal Blue Aurora Borealis coating.

In addition to the unique slippers, Swarovski also worked with Powell on scores of costumes, jewellery, accessories, hair, make-up, wigs and props. The crystal house provided over 1.7 million crystals, which were used to embellish costumes such as Cinderella’s breathtaking blue ball gown, the Fairy Godmother’s gown and magic wand, and the wicked stepmother’s dress. Swarovski also opened its famous jewellery archives to Sandy Powell and her team, who used vintage pieces to lend added glamour to the ballroom scenes.

Branagh’s Cinderella, is a live-action feature inspired by the classic fairy tale. It brings to life the timeless images from Disney’s 1950 animated masterpiece as fully-realized characters in a visually-dazzling spectacle for a whole new generation.

Nadja Swarovski, Member of the Swarovski Executive Board, commented: “We are always delighted and honoured to work with Sandy Powell, a design genius whose artistry and impeccable eye for detail results in the most beautiful costumes that lend magic to every project she works on.

“Swarovski is as much about innovation as it is about glamour and sparkle, so we are especially thrilled to have helped Sandy realise her vision for the crystal slipper, a technically challenging sculptural piece whose 221 crystal facets refract the light in the most enchanting way. Like Dorothy’s ruby slipper, it is an icon of storytelling and absolutely central to the plot, so it had to be perfect.”

Sandy Powell commented: “For me, Swarovski crystals are a key creative ingredient to add sparkle, depth and colour to my costumes. Cinderella is without doubt the ultimate romantic fairy tale, and I honestly couldn’t imagine designing the costumes without the invaluable contribution of Swarovski. Their involvement adds the essential elements of glamour and enchantment necessary to bring the characters to life in a magical way.”

Since the emergence of the silver screen, Swarovski crystals have played a supporting role in some of Hollywood’s most memorable cinematic moments and illuminated its most iconic stars. Working hand and hand with costume and production designers, Swarovski is proud to have captured the spotlight by adding sparkling glamour to show-stopping jewels, costumes, props and sets.