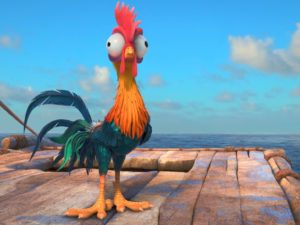 Carpet goes through a lot of pain to keep Aladdin on his track to win Princess Jasmine and defeat Jafar. He gets stepped on, pulled, and even unraveled for the cause, but he maintains a playful and humorous demeanor throughout the franchise. He’s excellent at chess and is always up for boxing or even a rousing game of hide-and-seek. Take a bow, Carpet!

Abu is Aladdin’s right-hand monkey. Abu has Aladdin’s back through thick and thin, and he often is a better judge of character than his protagonist. Ah, if only he could communicate that through more than suspicious looks and threatening screeches. Luckily, he understands Aladdin perfectly and is always ready to act himself out of sticky situations. Abu is a tightly-wound ball of energy ready to respond to anyone picking on him. You go, Abu!

Aladdin is a wealth of silent characters. Raja is another fine example of a character that impacts the development of a protagonist and the outcome of the story. Raja is Jasmine’s only friend. He protects her from annoying suitors by attacking their trousers and insulting them. He is affectionate and expressive with as much sass and spunk as the Princess herself!

Oh, Ed. When he was a cub he must have been dropped on his head, that’s for sure. Ed understands the world around him but just cannot seem to fit in. Whether he is getting a bum full of thorns or smacked with a branch, this particular hyena can never catch a break – which makes for an excellent source of comedic relief for the viewers. Ed’s laugh and awkward moments are more than enough to send any child into a giggle fit without saying a word.

This hungry little raccoon is always getting himself into trouble. He is a stark contrast of Percy the pug, whom he is always dragging into mischief with him. He takes Percy’s food, interrupts his bubble baths, and tricks him into sticky situations – like a run-in with Grandmother Willow. Meeko is a free spirit that knows what he likes and isn’t afraid to go get it. (It’s usually biscuits).

This little hummingbird does his best to keep Meeko in line. He is constantly prodding Meeko into doing the right thing, and is constantly falling short. He is an expressive little creature that can’t help but get in the way on occasion, and it usually hurts! Poor Flit has been sat on and even gotten his beak stuck in a tree. After a quick squeaky rant he is back to his sweet and helpful demeanor to support Pocahontas.

This little pug is as tightly-wound as they come. He is prim and proper and has no time for Meeko’s shenanigans. He is easily flustered by Meeko’s antics, but must always have the last bark in the matter (or try to, anyway). He follows Meeko on strange adventures, barking in protest the entire time. He gets dirtier and angrier as the adventures progress, and eventually gives in to his animal instinct to become friends with the annoying raccoon.

This little cricket was purchased under the assumption that he is lucky – and he sure seems to be! Cri-Kee is with Mulan through all of her adventures, and her biggest mishap, as well. Cri-Kee single-handedly takes down the Matchmaker in an awkward fit of ink and tea. He then accompanies Mulan on her journey to war to provide luck and support for other missions, like the bombing of the mountain or the fake letter of redirection. Cri-Kee packs a lot of talent and humor into one tiny package!

The Man with the Ice Cream Cone – Lilo & Stitch

Lilo is a strange girl looking for people as strange as she is. In her adventure with Stitch, one person in particular makes several silent appearances. The Man with the Ice Cream Cone is somehow always in the right place at the right time for comedic purposes – and he always loses his ice cream for the sake of a laugh.

Juju – The Princess and the Frog

Juju is an incredibly laid-back snake. He lets Mama Odi walk all over him and even turn him into other animals. He gives her all the support a blind voo-doo lady needs with all the facial expressions she will never see. His reactions are priceless, from her wake-up call to smooches, Juju has the demeanor of a dog which makes for quality family-friendly laughs.

For being limited by his size, this firecracker of a Chameleon goes above and beyond to help Rapunzel realize her dream. He always has her best interests at heart and is obviously protective of her against strangers. His color-changing with mood and setting, and his odd, but effective, waking antics make for a unique sidekick for the lost Princess.

Another Tangled favorite is Maximus. Maximus is a fierce palace horse with a feisty attitude. He doesn’t have time for lame excuses, but he may take a moment for an apple [bushel]. His determined nature gets him into some pretty interesting predicaments, but he presses on! Whether he’s tracking down, monitoring, or rescuing Flynn Ryder [Eugene], he is always providing top notch military horse service and laughs.

Kevin’s antics are as eccentric as her feathers. Her stealthy hide-and-seek skills are legendary because of her ability to climb into awkward spaces. She will do anything for chocolate and becomes a big help in Carl’s quest. She is completely unfazed by negativity and will do anything to protect her babies.

Though Kristoff likes to speak for his antlered friend, Sven never speaks throughout the Frozen film (or short). He is a silent and sassy reindeer that is full of surprises. He provides Anna and Kristoff the transportation support they need in their adventure – along with plenty of laughs! He’s curious and gentle, but clearly a carrot-addict. Olaf is lucky that Sven is such a sweet creature or he may have had need for a new nose.

HeiHei is the  most unorthodox travel companion anyone could ever ask for, but turns out to be the perfect chicken for the job of returning the heart of Tafiti. He is a few feathers short of brilliance and exceptionally uncoordinated which makes him the perfect comedic relief for kids and adults to enjoy!

Everyone knows the Ocean can be a bit temperamental, but Disney brought that attitude to life in Moana! From playing with baby Moana’s hair to stuffing HeiHei in a basket to prevent him from falling off the boat, the Ocean certainly has a mind of its own in this magical journey.

Who is your favorite silent Disney character?