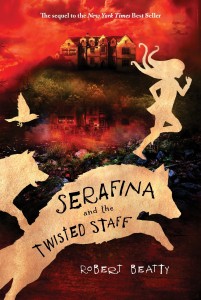 The highly anticipated sequel to the bestselling mystery-thriller Serafina and the Black Cloak is set for nationwide release on July 12.

The highly anticipated sequel to the bestselling mystery-thriller Serafina and the Black Cloak is set for nationwide release on July 12.

Serafina and the Twisted Staff, from author Robert Beatty and publisher Disney Hyperion, continues the adventures of an unusual 12-year-old girl who lives hidden away in the basement of the grand Biltmore Estate in North Carolina during the 1890s. The second in a series of three books written for both adults and children (ages 8 and up), Twisted Staff mixes history, mystery and fantasy, all against the backdrop of the rugged beauty of the Blue Ridge Mountains and the opulence of the Gilded Age.

Early praise from Kirkus Reviews says Twisted Staff is “Even better than its predecessor, a sequel that delivers nonstop thrills from beginning to end.” (Starred Review)

In Twisted Staff, Serafina is starting to come out of the shadows. She finds herself caught between two worlds – the formality of Vanderbilt aristocracy and the wild ways of the forest. She and her friend Braeden Vanderbilt must solve a new set of mysteries as they face their darkest enemy yet. “Serafina’s world is expanding and changing,” said Beatty. “She’s coming to terms with her past and facing serious challenges. She and Braeden have to be braver and smarter than ever.” 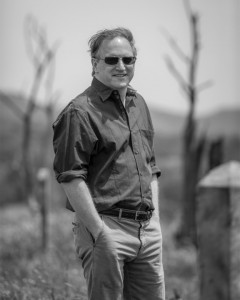 Serafina and the Twisted Staff, from author Robert Beatty and publisher Disney Hyperion

Since its release last year, Serafina and the Black Cloak was on the New York Times Best Sellers List for 20 weeks. It has also appeared on the best seller lists of Publisher’s Weekly, USA TODAY, Barnes & Noble, Amazon and independent bookstores. It was selected by the Southern Independent Booksellers Association as representing the “best in Southern literature,” and has won many honors on Goodreads.com. Recently, it was named a finalist for the prestigious 2016 Pat Conroy Southern Book Prize. A fast favorite for teachers and students, the book is being taught in hundreds of classrooms across the nation and has appeared on summer reading and Battle of the Books lists.

Serafina and the Twisted Staff is available for pre-order now at bookstores nationwide or on Amazon at Serafina Disney Hyperion. The Summer Book Tour kicks off July 9 with stops in cities throughout the Southeast, including Asheville, Charlotte, Hickory, Greensboro and Raleigh-Durham, N.C.; Greenville, Spartanburg and Columbia, S.C.; Knoxville and Johnson City, Tenn.; and the metro Atlanta area. Visit robert-beatty.com for more information on Serafina and the Twisted Staff and the Summer Book Tour.