Disney Consumer Products and Interactive Media (DCPI), along with Hasbro, Inc., announced the pre-sale of Playmation Marvel’s Avengers – the groundbreaking new system of toys and wearables that uses smart technology to inspire kids to run around and use their imaginations, as they become the hero or heroine of stories from Marvel’s Avengers. The Playmation Marvel’s Avengers Starter Pack, Smart Figures and Prowler Bot are available to pre-order online at Amazon.com, BestBuy.com, GameStop.com, Target.com, ToysRUs.com and Walmart.com, as well as DisneyStore.com and at select Disney Store locations in the U.S. and Canada. 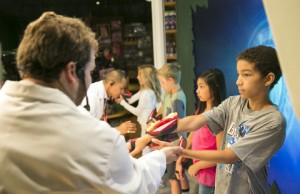 Kids playing with Playmation Marvel’s Avengers at Disney Store on Tuesday, July 7, 2015 in Glendale, Calif. Playmation is a new system of toys and wearables that uses smart technology to inspire kids to run around and use their imaginations, as they become the hero or heroin of stories from Marvel’s Avengers. (Photo by Colin Young-Wolff/Invision for Disney/AP Images)

Kids and parents can experience Playmation Marvel’s Avengers for the first time only at participating Disney Store locations beginning July 7, where two- and five-minute training sessions will be available daily. For those who want to take part in an expanded experience, 30-minute Avengers Gear Orientations will be available on Saturdays and Sundays by reservation only. During the 30-minute Avenger Gear Orientation, kids and parents will learn more about the Avenger Gear, follow instructions from JARVIS and interact with other participants to complete missions and adventures. In-store training experiences will be available through October; parents can visit www.disneystore.com/playmation for a list of participating Disney Stores and to reserve a spot for the Avenger Gear Orientation.

“Playmation Marvel’s Avengers puts kids at the center of stories from the Marvel Universe, taking them on active adventures right alongside Earth’s Mightiest Heroes,” said Paul Gainer, executive vice president, Disney Retail. “Kids can team up with the Avengers by trying on Repulsor Gear and going on a mission with the help of JARVIS as they take part in exclusive demonstrations at Disney Store.” 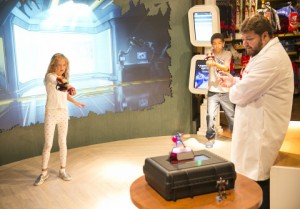 Kids playing with Playmation Marvel’s Avengers at Disney Store on Tuesday, July 7, 2015 in Glendale, Calif. Playmation is a new system of toys and wearables that uses smart technology to inspire kids to run around and use their imaginations, as they become the hero or heroin of stories from Marvel’s Avengers. (Photo by Colin Young-Wolff/Invision for Disney/AP Images)

Playmation Marvel’s Avengers, developed in collaboration with Hasbro, uses familiar technologies including wearables, wireless technology, motion sensors and more, but applies them in ways that are completely new to create a play experience that’s never been possible before. The Repulsor Gear connects with the Power Activators and Smart Figures to take you on a variety of adventures through locations around the Marvel Universe, from the Avengers Lab in New York to the jungles of Wakanda. Playmation is purposely not tethered to an Internet connection so players can run around and explore each adventure from anywhere they want – a bedroom, living room or yard. With multiplayer modes, players can sync their Avenger Gear to tackle missions and combat arenas together, or face-off in competitive play.

Playmation marks a new chapter in the long-term relationship between Disney Consumer Products and Hasbro, and their record of innovation and consumer insights make them the perfect partner to ensure that Playmation is a truly ground-breaking play experience.

Those who pre-order can expect to receive their purchase when Playmation Marvel’s Avengers becomes available at Disney Stores, disneystore.com and mass retailers in the U.S. and Canada beginning October 4. The suggested retail price of the Start Pack is $119.99, Smart Figures are $14.99, and the Prowler Bot is $39.99. The Disney Store and other retailers will be offering special pre-sale promotions beginning July 7; visit retailer websites for more details. The Playmation Marvel’s Avengers Starter Pack, additional Smart Figures, and Prowler Bot are each sold separately. Batteries are not included.