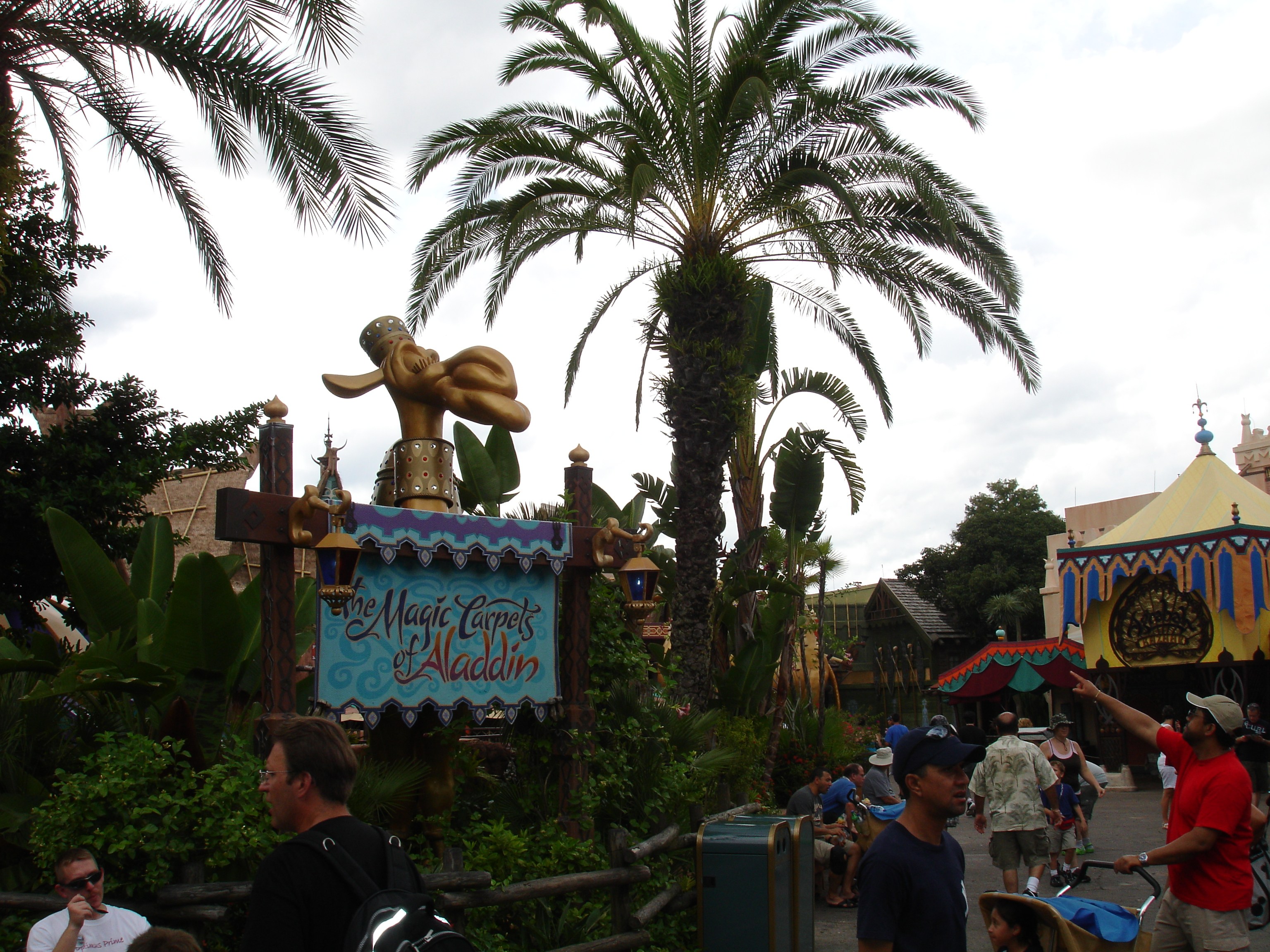 Hopefully by now you’ve read some of the previous tales of my first trip to Walt Disney World so I don’t have to get you caught up. Let’s just advance up main street to the Castle where you have to make a decision to turn right into Tomorrowland, go straight into Fantasyland, or turn left into Adventureland. I followed Josh off to the left and we entered a world of adventure. 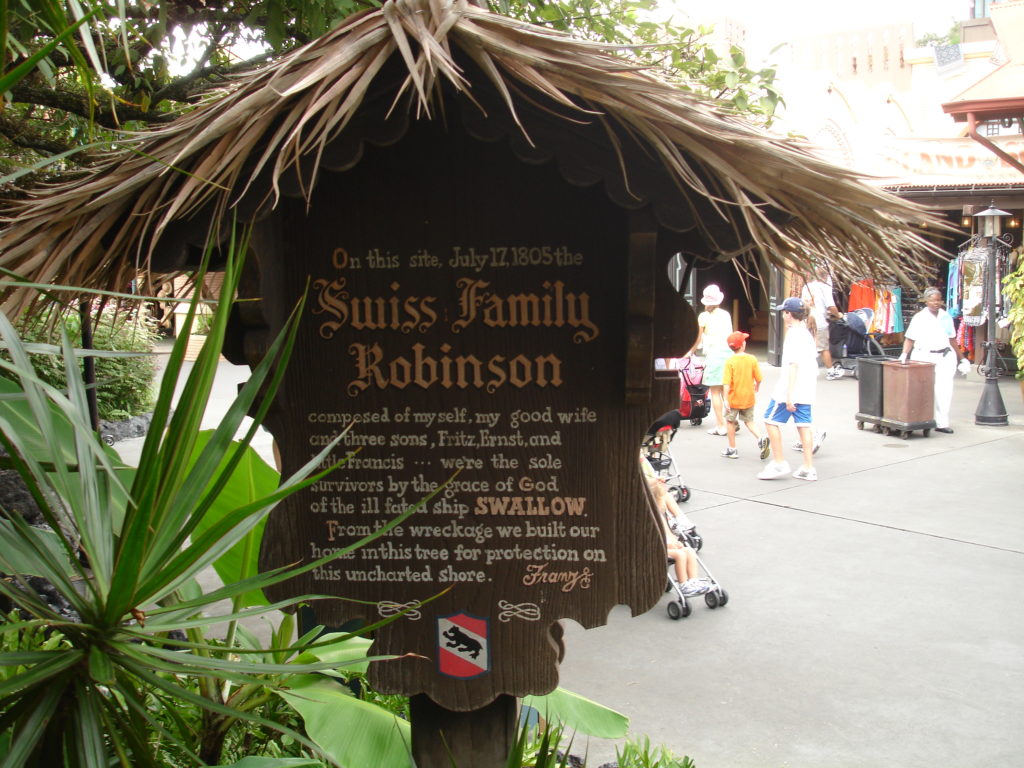 After passing by some spitting camels in Agrabah, I spotted the Swiss Family Treehouse on my right, and not knowing what it was, I entered into the walkway. I had never seen the film, though I had attempted to read the book once. I was thinking that I was wandering into a cue line for an attraction, but in truth, I was on the attraction. I was seeing the treehouse home of the family from the film, with it’s organ playing music I presume is from the film. The funny part of this walk was that Josh received a phone call near the top of the tree from his employer. 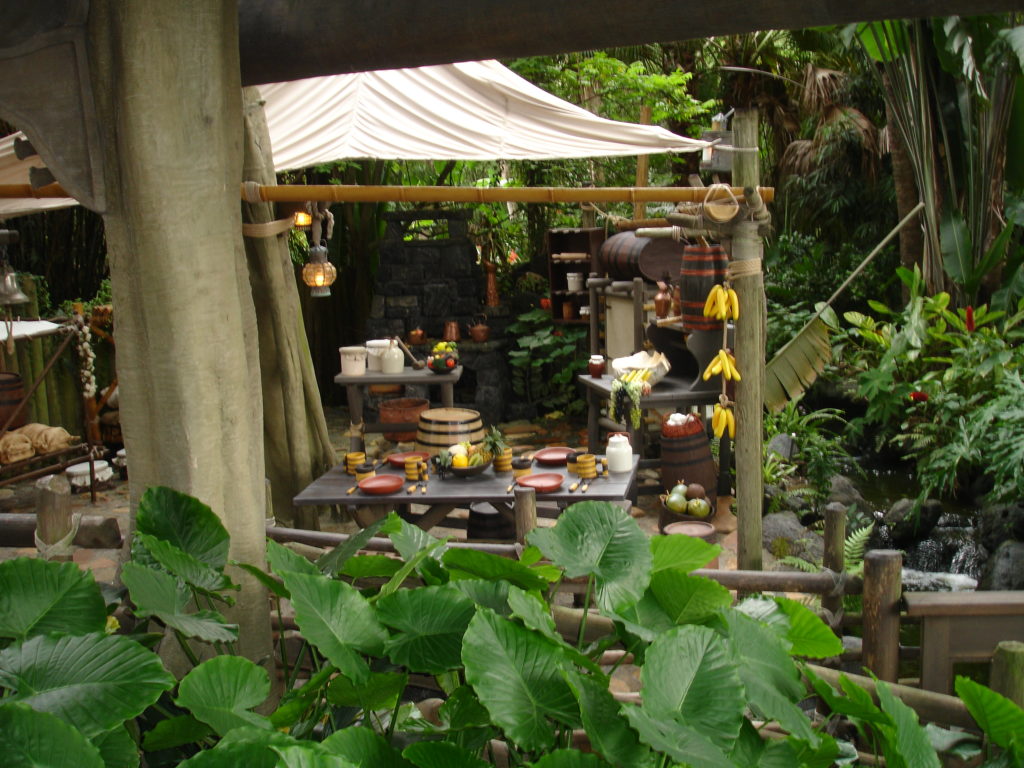 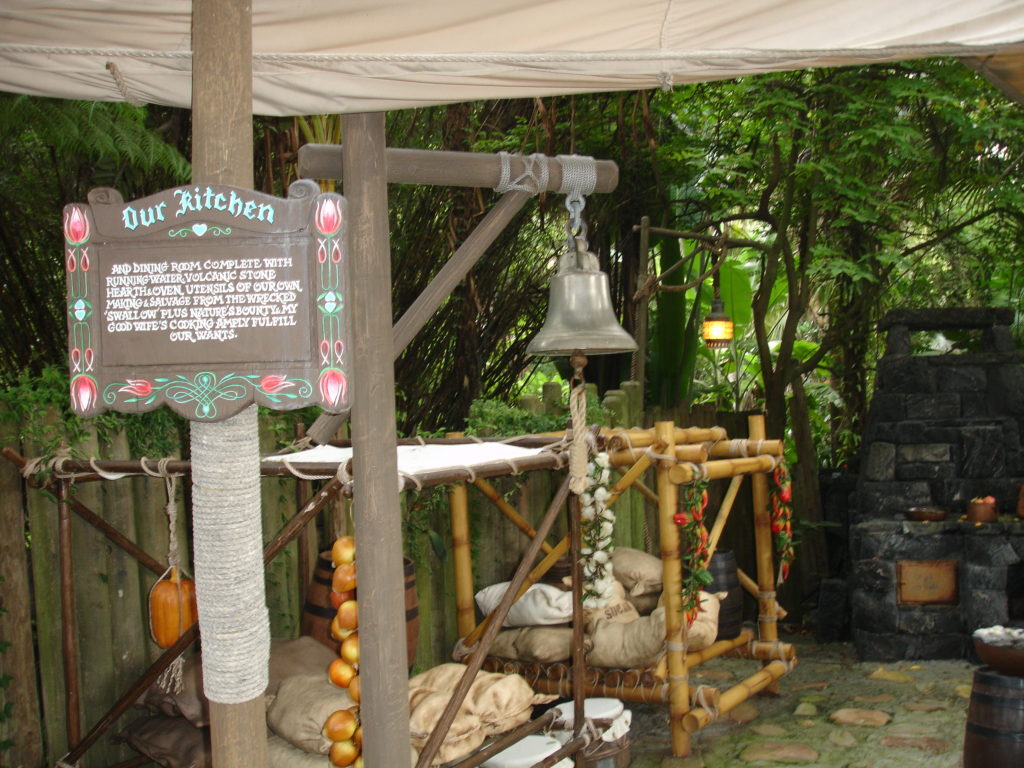 It’s not like he was suddenly going to show up for something at work when we were several states away, so we just kept on going. We approached a bit of a show going on where Jack Sparrow and an assistant were out recruiting for new members to his crew. He made promises of great treasure that don’t come easy, savvy? 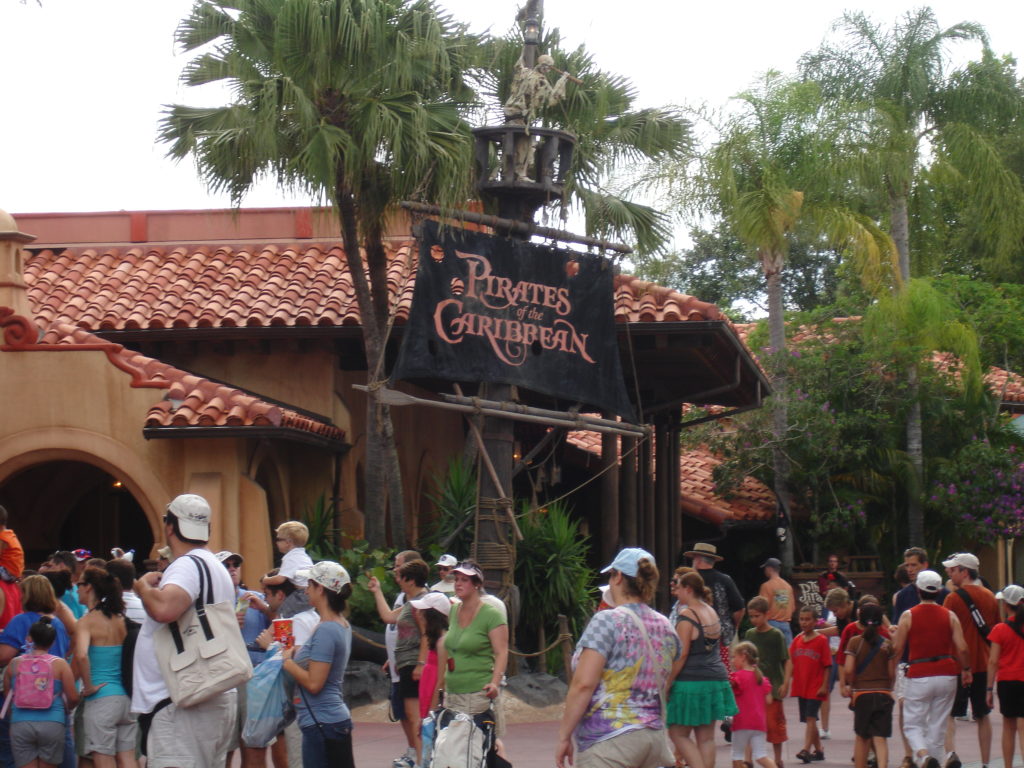 We hopped aboard a ship on Pirates of the Caribbean for a great and comical adventure with animatronic pirates as they raided a town…in search of Jack Sparrow who was everywhere. Nearly every scene featured him hiding from them or stealing a look at a treasure map. I later heard (and I own a copy of the album) the original audio from the attraction, and I have to say, I’d rather have seen it in it’s original form. Although I can happily say I got to see it before the auction scene was altered to be “less offensive.” 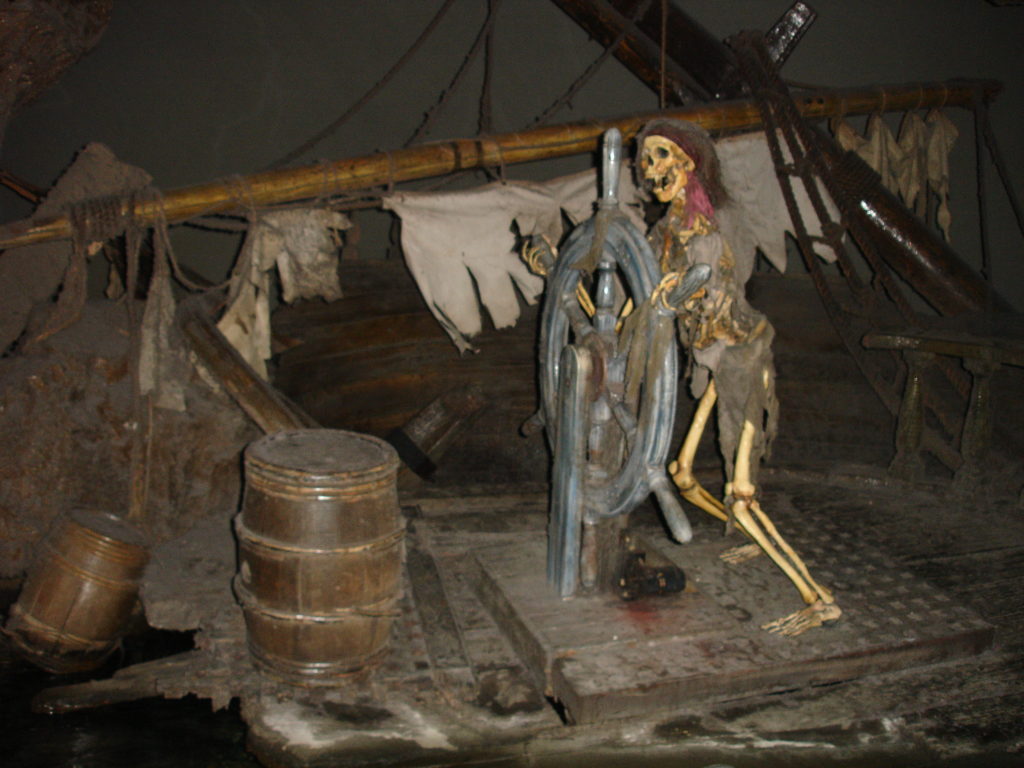 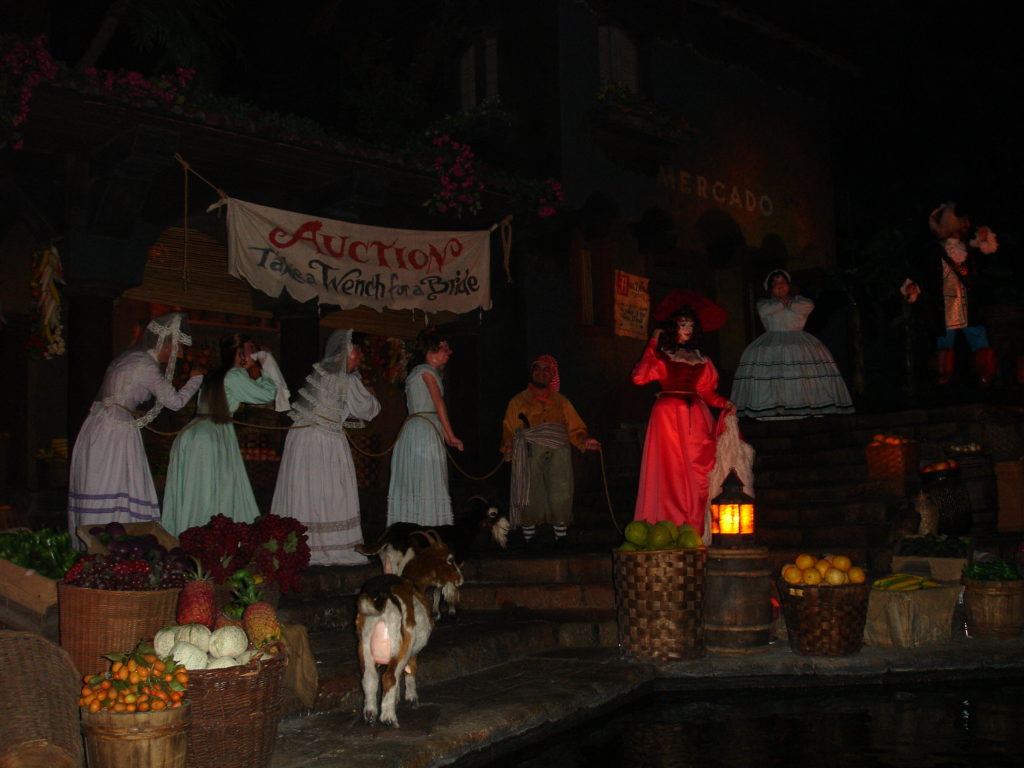 I enjoyed the ride and got a bit of video later on when we returned to ride it while the crowds were watching the fireworks on main street.

Our next stop on our tour of Adventureland was because I wanted to experience everything, so Josh reluctantly followed me onto The World Famous Jungle Cruise! I didn’t know what to expect, but I have memories of my grandmother having glasses with images from this attraction. I remember seeing one of the boats passing by a rhino chasing men up a pole. I don’t know where the glass had come from, but if I find out there was a set I can collect, I’ll go after them! 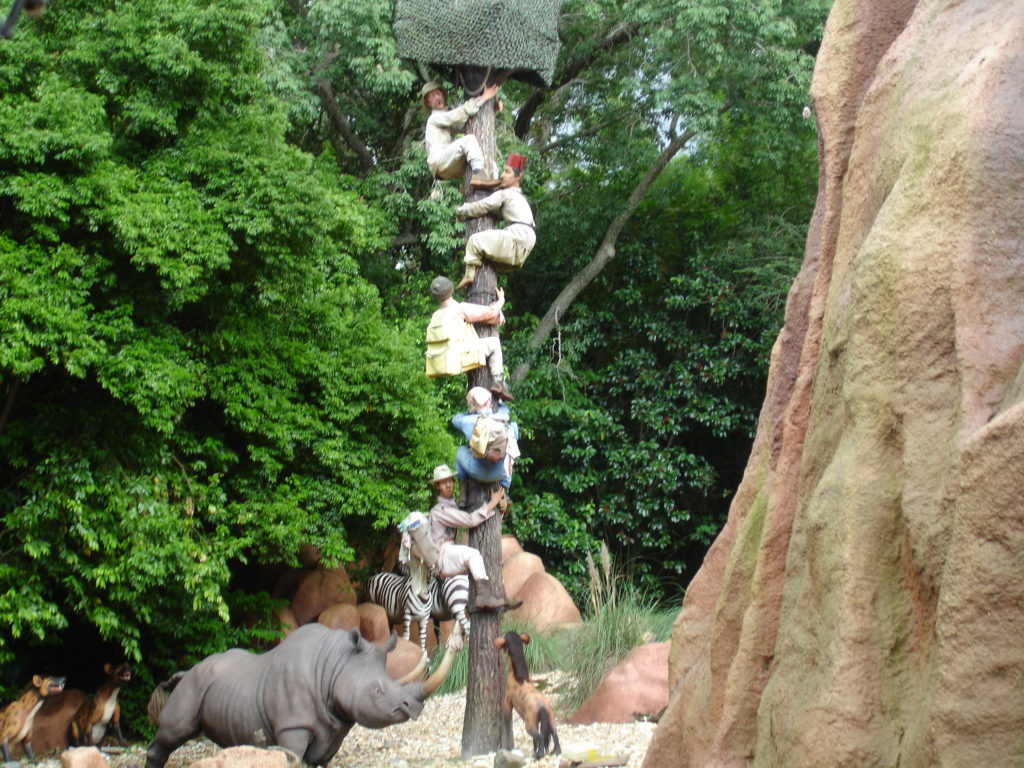 The Jungle Cruise features a skipper taking you on a tour and telling some very bad jokes and puns, that nonetheless, you’ll enjoy and laugh at. Your enjoyment of this attraction relies on having a quality skipper and ours was delightful. I did note on the ride a common movie sound trope that I hadn’t realized until I married a biology teacher. The sound often associated with monkeys in the jungle is actually the laughing call of the kookaburra. You know, the one that sits in the old gum tree? Merry king of the bush is he? Nevermind, the point is that I tried to point it out to the skipper. Thankfully she ignored me and kept going. Even in the jungle, a comedian gets hecklers.

Have you had a great experience with a Jungle Cruise skipper?