Muppets Most Wanted: A Must See Film

HomeMuppets Most Wanted: A Must See Film
Jonathan
Walt Disney Pictures
No Comments 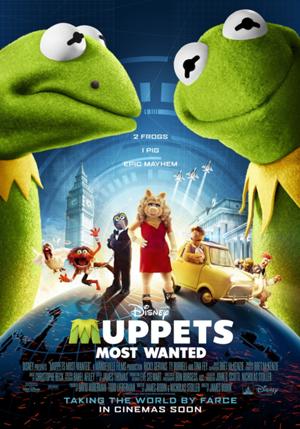 Hey D-heads.  I took my son today to see the new Muppet movie, Muppets Most Wanted.  This is a spoiler free review of what I thought of the film.

The movie is preceded by a Monsters University cartoon that is really enjoyable so don’t be late.  They also showed the latest Maleficent movie trailer and I can’t be more excited.

Getting back to Kermit and friends, I never get tired of a good Muppet movie and this one didn’t disappoint.  It is a great family film that parents and kids will both enjoy.  For those of us who grew up watching the Muppets this is another great adventure those loveable characters take us on. The film has some familiar cameo guest stars. The stars of this film are Ricky Gervais, Ty Burrell, Tina Fey and of course the Muppets.  Tina Fey is great as Nadya and she has some great musical and comical moments.  The interaction between Ty Burrell, as a French inspector, and Sam Eagle is brilliant.  And of course Ricky Gervais as Dominic Badguy is a great part of the film.  If you love the Muppets this a must see film for you.  I hope this leads to more Muppet movies in the future.

ABOUT MUPPETS MOST WANTED:
Following on from the end of their last film, the Muppets find themselves at a loss as to what to do next. Per the suggestion of their tour manager Dominic Badguy (Ricky Gervais), the Muppets decide to embark on a world tour. Meanwhile, Constantine, the world’s number one criminal and a complete dead ringer for Kermit, escapes from a Siberian Gulag, before making contact with Badguy, who turns out to be Constantine’s subordinate; a position Constantine frequently reminds him of.

Arriving in Berlin, the Muppets intend to play in a shabby venue, but Dominic secures them a show at a more prestigious location. Becoming increasingly frustrated with the rest of the Muppets’ ludicrous requests for the show and Miss Piggy‘s insistent hints at marriage, Kermit takes a stroll to calm down at the suggestion of Badguy. However, he is ambushed by a hooded Constantine, who slaps a fake mole on Kermit’s right cheek, making him resemble Constantine. Constantine escapes and Kermit is arrested and taken to the Gulag in his place.