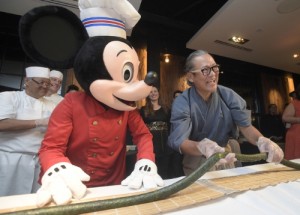 To the pounding rhythms of Japanese drums and the ceremonial breaking of the sake barrel, Morimoto Asia – the first-ever collaboration between Patina Restaurant Group and Japanese master chef Masaharu Morimoto — opened to a media preview Tuesday at Disney Springs, a reimagined shopping-dining-entertainment district at The Walt Disney World® Resort. The event featured culinary displays from Iron Chef Morimoto that included breaking down a 100lb Hawaiian big eye tuna that was used as part of a 60-foot long maki roll. Chef Morimoto received help from several of the event’s guests in making the sushi roll, including a very special guest, Mickey Mouse. 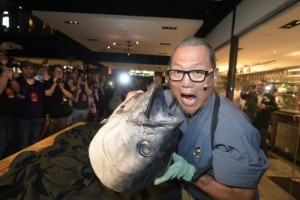 Morimoto Asia occupies The Landing, one of four neighborhoods in Disney Springs. Morimoto Asia opens to the public on Wednesday, Sept. 30 for dinner service at 5pm. Its menu features cuisine from across Asia, a first for Chef Morimoto.

“I believe that food has the power to bring people together and these are some of my favorite dishes from all over Asia,” said Iron Chef Masaharu Morimoto. “My team and I are so excited to welcome everyone to Morimoto Asia!”

“We are committed to providing exceptional pan-Asian cuisine and an unmatched dining experience to the guests of Disney Springs,” Valenti said. “This opening marks our ninth restaurant with our partners at The Walt Disney Company, and we are thrilled to be here at the new Disney Springs.” 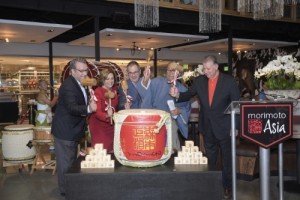 To see highlights of the restaurant and Chef Morimoto in action visit http://disneyparks.disney.go.com/blog/2015/09/morimoto-opens-tomorrow-at-disney-springs/ or visit www.morimotoasia.com