Marvel’s Guardians of the Galaxy: Rocket Raccoon and Groot Steal the Galaxy! 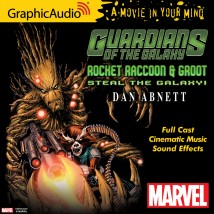 Marvel’s Guardians of the Galaxy: Rocket Raccoon and Groot Steal the Galaxy!

GraphicAudio® A Movie in Your Mind®, in conjunction with Marvel Entertainment, bring the adventures of Rocket Raccoon and Groot straight to your ears with Marvel’s Prose Novel adapted by GraphicAudio.

They are not Captain America, Iron Man or Spider-Man, however Rocket Raccoon and the faithful Groot are the baddest heroes in the cosmos, and they’re on the run across the Marvel Universe! During a spaceport brawl, the pair rescues an android Recorder from a pack of alien lizard men. Everyone in the galaxy including the ruthless Kree Empire and the stalwart Nova Corps, seems to want that Recorder for their own power. Join Rocket and Groot and some special guests as they redefine the word “mayhem” in an attempt to save the universe yet again!

ROCKET RACCOON AND GROOT STEAL THE GALAXY features over 40 talented voice actors, original music, sound effects and a very special vocal performance by Groot. Filled with action and humor this audio production will captivate the whole family while driving cross country during this Holiday Season.

Available from http://www.GraphicAudio.net and via the free GraphicAudio Access™ Mobile App which allows customers to directly download titles on their Android or iOS smartphones and tablets.