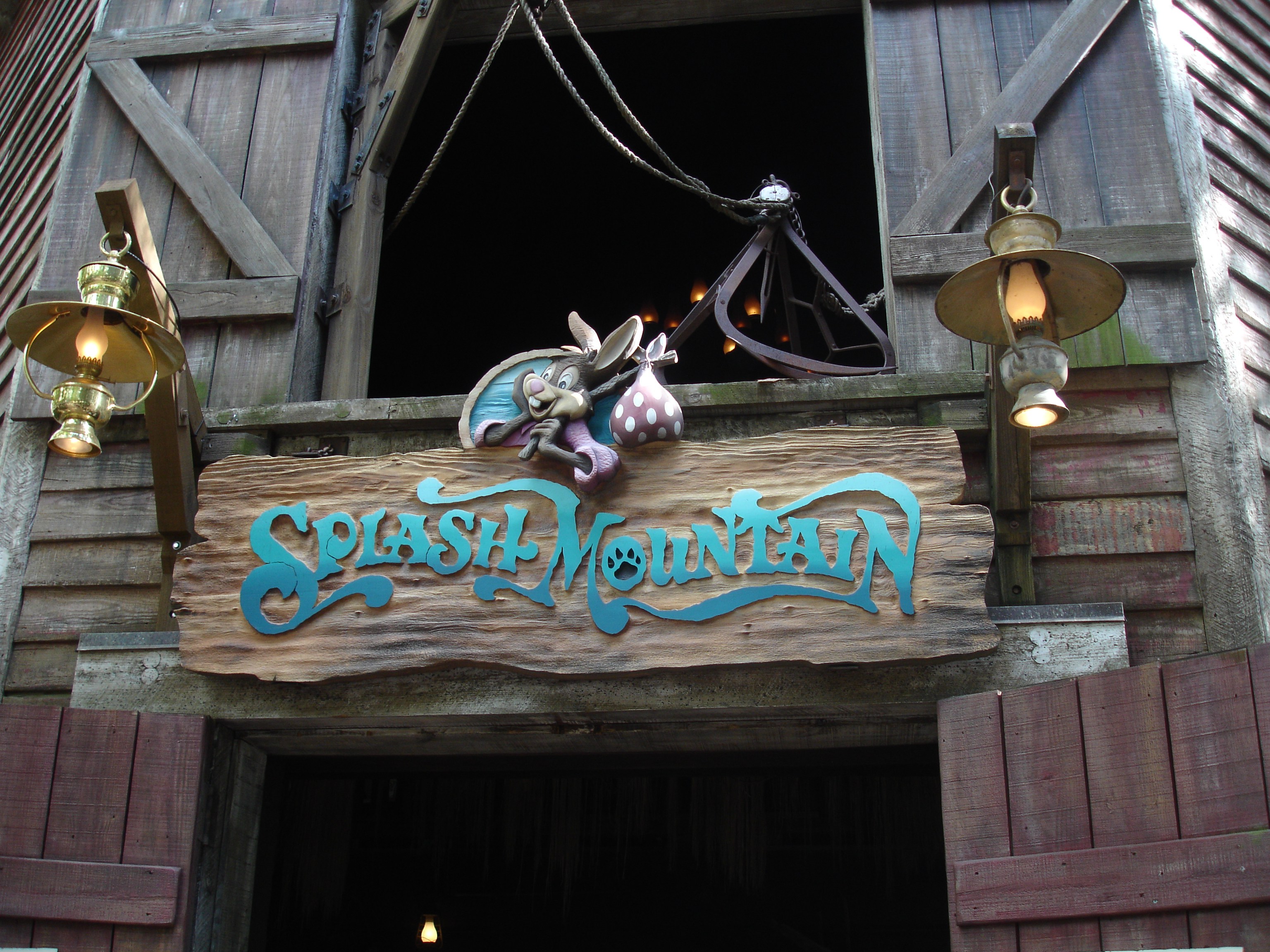 By now you’ve read about my previous exploits on my first ever trip to Walt Disney World, right? Well, if you are all caught up, it’s time to move on to the next chapter. And by that, I mean that we made our way over into Frontierland.

The first iconic view that I remember seeing was the long drop of Splash Mountain. This iconic drop into the briar patch is 52 feet down at 40 miles per hour. You’ve gone faster than this in your car, and yet there are people in the world that are terrified by such a drop. I have a good friend that kept their eyes shut knowing that drop was coming. This may be what you see from the outside, but the real fun of Splash Mountain is the journey you take on the inside. 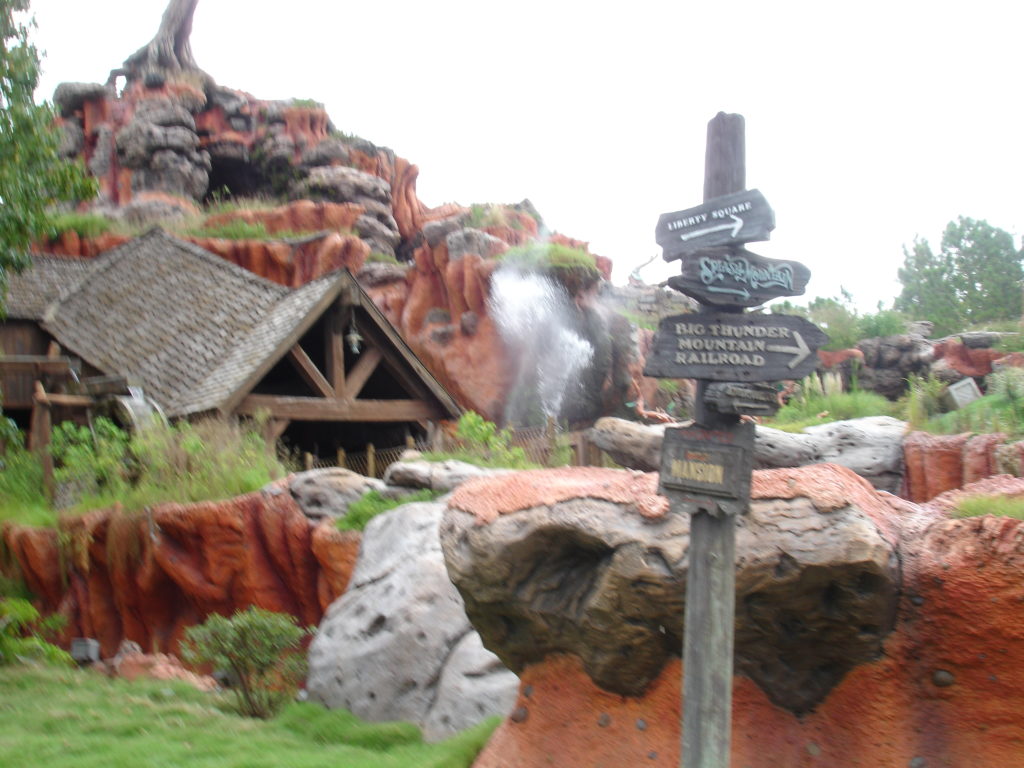 Based on the “controversial” Disney film, “Song of the South,” the interior of Splash Mountain is a delightful romp inside a cartoon world populated with anthropomorphic animals. You meet Br’er Rabbit as he’s grown tired of his simple briar patch life, and despite warnings from his friends, he sets out on an adventure to find his laughing place. Br’er Fox and Br’er Bear begin plotting how to catch that rabbit and do…well…they can’t decide what to do with him…but it’ll be bad. And painful if they can help it. 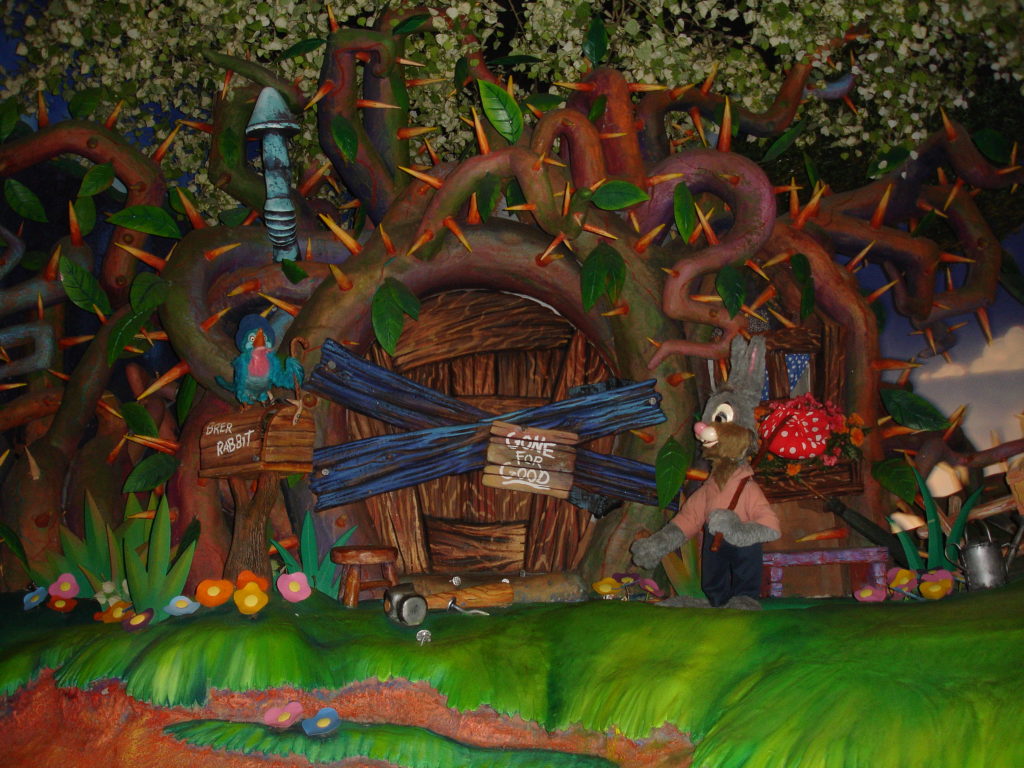 What follows is lots of fun and music as we see characters fishing and generally having fun enjoying life in the great south. The music is delightful and singing cheerfully “how do you do?” and you might just be inspired to sing along as you go along with Br’er Rabbit as he hops along the bunny trail. 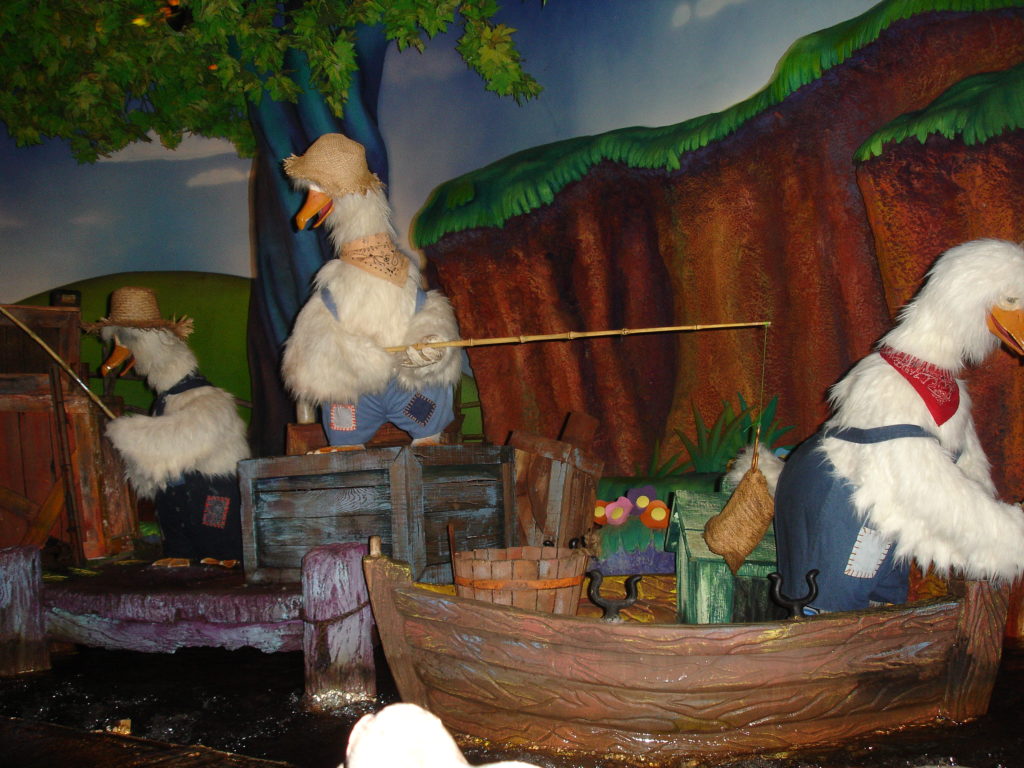 Meanwhile, that sly fox and his dumb bear buddy, are in hot pursuit. 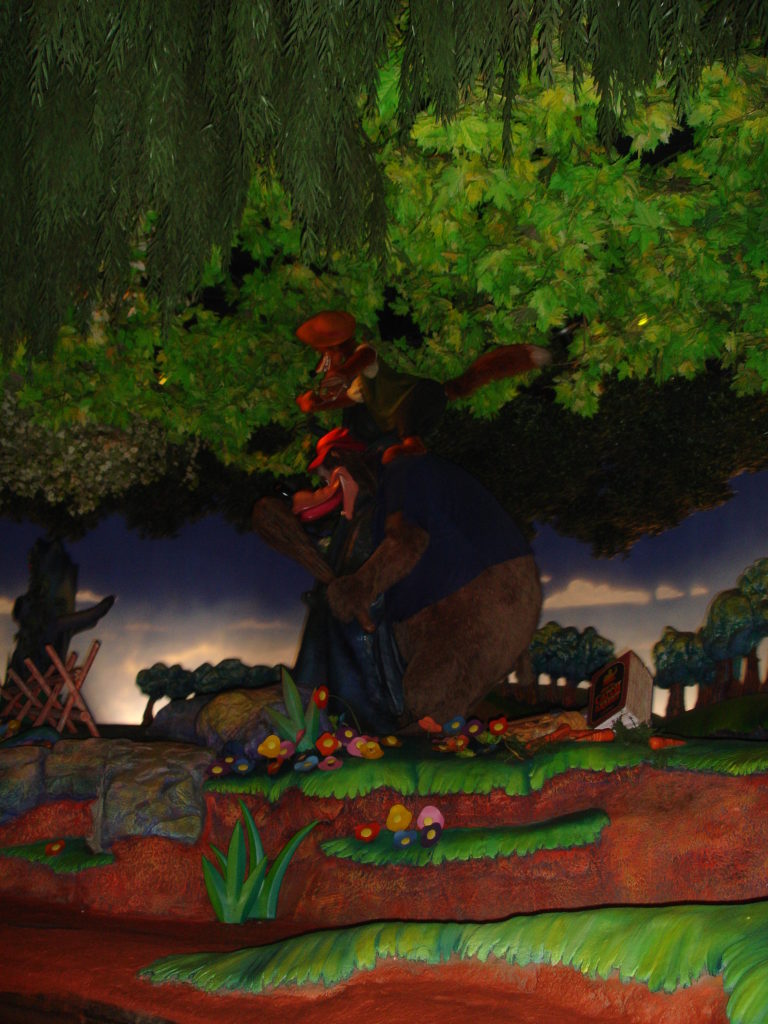 We finally arrive at Br’er Rabbit’s hiding place, and eerie cave with lot of fountains and bees with beehives. The music gets livelier and happier. It’s a party that’s about to come crashing down on Br’er Rabbits head, in the form of a beehive. Sticking him with honey is a lot less…sketchy…than setting up a “tar baby” to trap him. 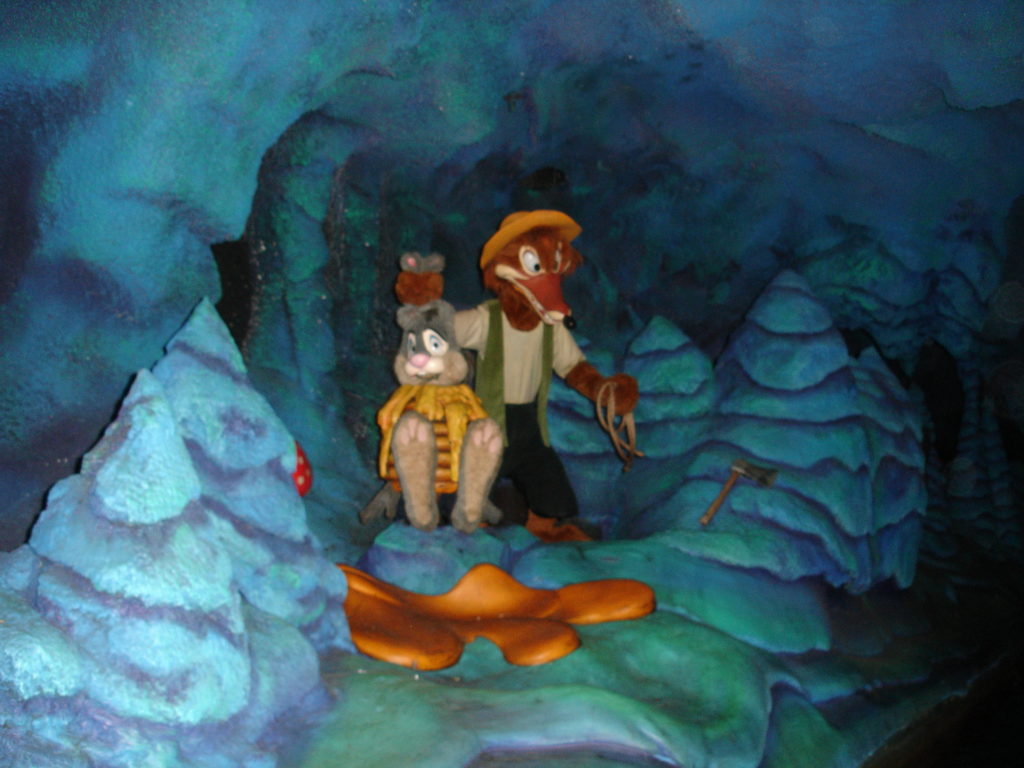 From this point we are seeing things through the eyes of Br’er Rabbit. The tone of the ride changes yet again into a scary ride as vultures mock us about wanting to go the laughing place and how if we’d found it, why aren’t we laughing. As we begin a dark ascent we overhear Br’er Fox and Br’er Bear discussing all of the horrible things they should do to him. It’s similar to the three trolls in The Hobbit trying to figure out how to best eat dwarves. Our bunny hero uses his wits and declares they can do anything they want to him, just PLEASE don’t throw him into the briar patch!

Figuring he’s going to get shredded in the briar patch, we go down that 52ft slide and water jets fly up into the air to make it seem to anyone watching that we made a bigger splash then we really did as we arrive safely back home. We’re greeted by all of Br’er Rabbit’s friends on a riverboat as they sing “Zip-a-dee do-da” and that happy hare is seen cozy at home. Meanwhile, our villains are having gator troubles as they look in on the briar patch. 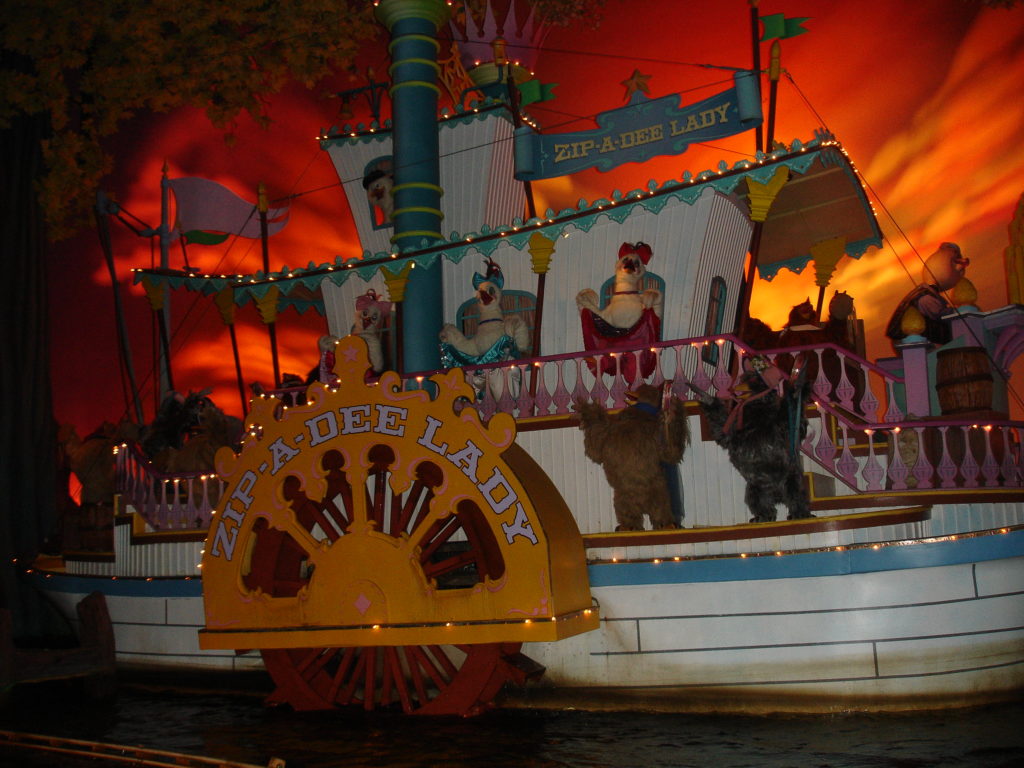 What are your thoughts on Splash Mountain?