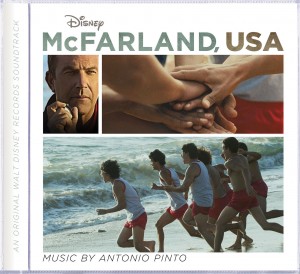 GRAMMY®-winning Latin music superstar Juanes has recorded the end title track, “Juntos (Together)” for Disney’s “McFarland, USA.”  The original song will be released digitally and serviced to Latin Radio across the country on January 20. “Juntos (Together)”will also be included on the full original motion picture soundtrack,  with score from Brazilian composer Antonio Pinto, set to be released by Walt Disney Records on February 17. “McFarland, USA” will arrive in theaters on February 20, 2015.

Juanes traveled to McFarland, California and filmed a music video for “Juntos (Together)” that will also be premiered next week.  “I was thrilled when Disney invited me to be part of this very special project,” explains Juanes. “Watching the film left me inspired about the power of teamwork, tenacity and faith, and I’m honored to now be part of the ‘McFarland, USA‘ team.”

Niki Caro, the director of “McFarland, USA,” returned to McFarland to shoot the music video and says of Juanes’ participation, “I’m thrilled to have Juanes’ collaboration on this movie. His song ‘Juntos (Together)’ goes to the very soul of ‘McFarland, USA.'”

With seven solo albums to his credit and multi-platinum sales of over 16 million copies, Juanes is the world’s leading all-Spanish language rock artist–both a 2-time GRAMMY® and 20-time LATIN GRAMMY® winner with nine #1 singles on Billboard’s Latin Singles charts. Working with famed rock producer Steve Lillywhite, Juanes’ latest album “Loco De Amor” was released in the spring of 2014 and debuted at #1 on Billboard’s Latin Pop Albums chart and topped iTunes sales in over a dozen countries. Juanes is also frequently recognized as one of the Spanish-speaking world’s leading social media voices with an online following of over 18 million fans. The Colombian superstar’s dedication as a global activist also extends far beyond his passionate lyrics and is seen in his wide ranging charitable work for his own Mi Sangre Foundation and as a co-founder of the “Paz sin Fronteras” (Peace Without Borders) organization.

ABOUT THE MOVIE:
Based on the 1987 true story, “McFarland, USA” follows novice runners from McFarland, an economically challenged town in California’s farm-rich Central Valley, as they give their all to build a cross-country team under the direction of Coach Jim White (Kevin Costner), a newcomer to their predominantly Latino high school. Coach White and the McFarland students have a lot to learn about each other but when White starts to realize the boys’ exceptional running ability, things begin to change. Soon something beyond their physical gifts becomes apparent—the power of family relationships, their unwavering commitment to one another and their incredible work ethic. With grit and determination, the unlikely band of runners eventually overcomes the odds to forge not only a championship cross-country team but an enduring legacy as well. Along the way, Coach White realizes that his family finally found a place to call home and both he and his team achieve their own kind of American dream.