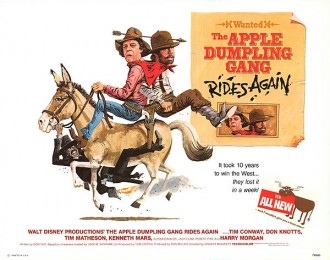 Since it is Friday it is time for the DizRadio.com Friday Discussion Group. This week we are tackling once of Disney’s lesser know classics that should be viewed from all kinds of family fun, The Apple Dumpling Gang Rides Again.

“The Apple Dumpling Gang Rides Again is a 1979 sequel to the 1975 American family film The Apple Dumpling Gang starring the comedy duo of Tim Conway, and Don Knotts. Conway and Knotts reprise their roles as Amos and Theodore. The film also stars Tim Matheson, Harry Morgan, and Kenneth Mars. Laugh-In star Ruth Buzzi appears in a small cameo as a wild farsighted woman. Robert Totten, who directed installments of Gunsmoke, also had a small part in the film.”

This film, although not as beloved as the first, is a true gem. What makes this film fun and memorable is the fact that this time Don Knotts and Tim Conway as the main stars of the film. In this film we get to see them as bumbling buddies trying to go straight and they do it so well you cannot help but fall in love with the characters right from the start. The humor and slapstick fun is a bit cheesy to today’s standards, but the joy in the film is in its simplicity and being something you can watch with your family, laugh, and take a moment from the crudeness, and fast style of today’s films and show yourself or your children a simpler side of life, and focus on story, laughing and not being in your face. 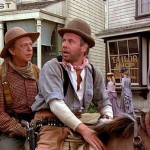 And might I add a corny yet funny moment I personally enjoy is when Knotts and Conway are dancing as showgirls in the saloon and are being hit on. Been done many times, corny, yet still makes me laugh.

So what are your thoughts on this film? Classic? Do You Own It? What is your favorite moment?