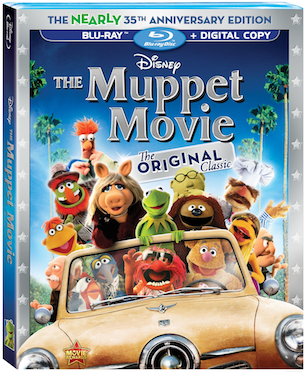 The Nearly 35th Anniversary Edition Blu-Ray of The Muppet Movie

Movin’ Right Along….. you know the words, we all dream over That Rainbow Connection and don’t we all have Electric Mayhem friends? The Muppets are something that we all have grown up with in the past 35 plus years from the early days of Kermit, to Sesame Street and The Muppet Show. Just the same it is full of friends, heart, music and fun that we have that special place for and, in many cases, have passed down to our children.

The Muppet Movie is celebrating it’s 35th Anniversary this fall and is getting the treatment you have been waiting for on Blu-Ray August 13, 2013.

Kermit and the Gang head on the road to Hollywood once again to be rich and famous all the while staying clear of Doc Hopper and his henchmen. This film has so many heart warming moments, simple family friendly humor and wit that hold up thirty-five years later. If there is one thing The Muppets are able to do is to stay fresh and young to an entire new generation in glorious, beautiful Blu-Ray that is jam packed to commemorate their milestone film.

Synopsis:  See how the Muppets began, with the nearly 35th Anniversary Special Edition of the original, classic that started it all—The Muppet Movie, produced by the cultural icon and Muppet creator himself, Jim Henson!  Witness the hilarious origins of everyone’s favorite Muppets–Kermit the Frog, Fozzie Bear, Miss Piggy, Gonzo, Animal, and the rest—as they embark on an inspirational and laugh-filled road trip to follow their Hollywood dreams.  And now for the first time, you and your family can see the Muppets make the “rainbow connection” in vibrant Blu-ray Hi-Def.

Bring home the story of the Muppets’ rise to stardom on hi-def for the first time ever, complete with all-new bonus and the non-stop entertainment of Disney Intermission.  Experience the beloved Muppet classic like never before on Hi-Def Blu-ray and Digital, August 13, 2013