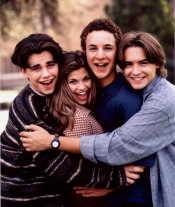 So who remembers the good old Friday Night lineup for Disney? I know we do, and one of those classic sitcoms was Boy Meets World. The great family friendly show following Cory and his family as they grow in life’s struggles, fall in love, the trials of life and the teacher student relationships.

We all loved Mr. Feeny, you know the hard teacher and principle, yet mentor (and voice of KITT in Knight Rider), as he guided Cory and his troop through the growing pains of life.

The show was a instant classic and went on for 7 seasons watching the kids go from grade school all the way to college and marriage.

Well it seems the Walt Disney Television has started development on a sequel series to the show called “Girl Meets World”.

The show would follow the pre-teen daughter of Cory and Topanga from the original series (who married in the 7th and final season). Once can guess that it would be a similar format to the original show and talks have begun with Ben Savage and Danielle Fishel to reprise their roles this time as parents.

These kind of shows are fun to watch we all remember the New Leave it Beaver Show, and Just the 10 of Us, Frasier, among others that have been great spin off series. There is no development on the status of the other original stars, yet we can imagine that they will make a cameo if anything, from Will Friedle (Eric, Cory’s Older Brother), and Rider Strong (Cory’s Best Friend Shawn).

Personally I think this would be a great show for a few reasons, one, it would bring back something missing from TV, FAMILY ENTERTAINMENT again! Second, it would get rid of more reality tv, and also it would be a series parent and kids could have fun with since many kids watching it would love to see the daughter, their parents would remember Cory and Topanga.

What do you think? Is this something you are excited for?