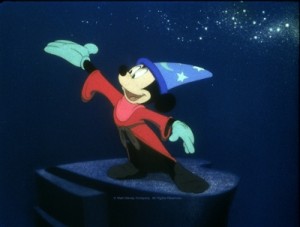 Walt Disney’s 75-year old, bold experiment blending animation and classical music resulted in the much honored animated classic “Fantasia,” which returns to theaters nationwide for a strictly limited engagement beginning Sunday, November 8.  Honored by the National Board of Review as one of its Top Ten Films of all time, and the American Film Institute on its list of Greatest American Films, “Fantasia” was also inducted into the National Film Registry by the National Film Preservation Board.  In addition to the original feature, the event screenings will include a never-before-seen introduction and performance with the Philadelphia Orchestra, led by Music Director Yannick Nézet-Séguin.  BY Experience will release the film with more than 1,400 screenings nationwide.  Tickets for the “Fantasia” 75th Anniversary theatrical screenings are available now at participating theater box offices and online at www.Fantasia75.com.

Released in 1940 in the middle of World War II, “Fantasia” was initially envisioned as a short film to reinvigorate the sagging popularity of Mickey Mouse, but as the budget for the short soared, Disney decided to turn it into a full blown feature.  The film consists of eight animated segments conducted by Leopold Stokowski, with the famed Philadelphia Orchestra performing seven of them.  The soundtrack was recorded in ‘Fantasound,’ a then-new sound reproduction system, making “Fantasia” the first commercial film shown in stereophonic sound.

“‘Fantasia’ was a groundbreaking film in so many ways, and we are thrilled to have it back on big screens in its original form for new generations of moviegoers to experience,” said Julie Borchard-Young, co-president of BY Experience.  “The film is just as bold and innovative today as it was 75 years ago, which is why so many of Hollywood’s leading animators and filmmakers have referenced ‘Fantasia’ as an influencer on their careers and the art of animation in general.”

“Walt Disney’s vision matched with Leopold Stokowski’s genius, and that created an instant masterpiece: Fantasia,” said Philadelphia Orchestra Music Director Yannick Nézet-Séguin. “The legacy of this wonderful film and its music is an important part of The Philadelphia Orchestra’s past, its present, and its future. After 75 years it is still so relevant for today’s audiences.”