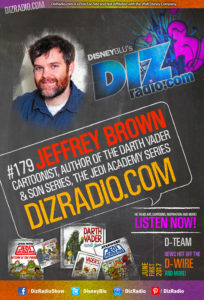 It’s Time D-Heads! This week we slow down, read with the family and make memories from a galaxy far far away as we welcome JEFFREY BROWN (Author, Cartoonist, Illustrator of the Darth Vader and Son Series, The Jedi Academy Series and more). Jeffrey stops in and discusses how he came up with the idea of Daddy Darth Vader, the series of books, Jedi Academy, how he deals with writer’s block, inspiration and more.

In addition no show is complete without the D-Team and Domenic stops in with his Disney Short Leash to give you some tips and tricks for a quick Disney World Trip, and you ask the questions and Erin has the answers in I Want To Know! And let’s not forget Randy with Disney Multi-Media!

There is news fresh off the D-Wire with the latest news about the Magic Kingdom, Sphero, Lightning McQueen Toy Cars, Guardians of the Galaxy Mission Breakout, Disney Channel, Descendants, China Anne McClain, Disney Junior, Hollywood Studios, Pirates, and so much more fresh off the D-Wire this week. 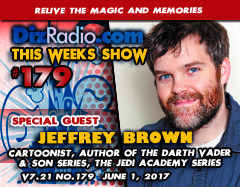 THIS WEEK’S SHOW: LISTEN NOW BELOW OR

(saves it as an mp3 to your computer)

GET OUR FREE iPHONE APP: