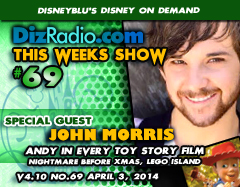 It’s time D-Heads! This week lets head into your childhood with an old friend and Woody’s buddy Andy. JOHN MORRIS (Andy in Every Toy Story Film, Nightmare Before Christmas, Lego Island) stops in the to show and talks about what it is like to be part of the Toy Story films, the touching conclusion to the trilogy, his favorite Toy Story films and moments, that one toy he would like to have again and what is he doing now.

In addition we have the D-Team back. Lexie is stopping in with the Hollywood Walk giving you more on our special guest John Morris and Erin is dipping his hand into the virtual mailbag and answering your questions in I Want to Know. WDW-In-2 is here with the latest from the Walt Disney World Resorts with Caitlin and Paige is back with the Magical Music Review.

There is news hot off the D-Wire with news about the Walt Disney World Resort, Frozen, Aladdin on Broadway, Tinker Bell, Disneyland, Disneyland Paris and more.

CONTACT US:
DizRadio@GMail.com with Show Ideas, Questions, Comments and more!