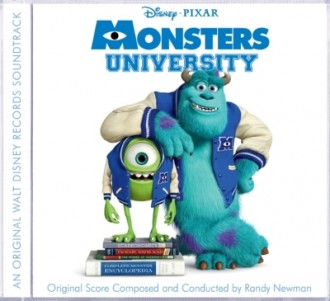 “We wanted to capture the college feel in ‘Monsters University,'” said Scanlon, “and music is a big part of that. The score and the inclusion of other great musicians like Axwell & Sebastian Ingrosso [of Swedish House Mafia] and Mastodon help us convey a fun, freewheeling college atmosphere.”

Oscar®- Grammy®- and Emmy®-winning composer/songwriter Newman is back, marking his seventh Disney-Pixar film. The 20-time Oscar nominee’s wins include “If I Didn’t Have You” for “Monsters, Inc.” and “We Belong Together” for “Toy Story 3.” The recently inducted Rock and Roll Hall of Fame member created a full Alma Mater titled “Monsters University,” establishing a recurring collegiate theme. “We recruited the team at Pixar Canada to record the Alma Mater,” said Scanlon. “We needed a giant crowd of crazy monster students to be singing it and the Canada team was great for this—the end result is sort of perfectly ‘off.’ Actually, the first time we recorded it, it was really good. I had to say, ‘Guys, these are college students at a sporting event, let’s mess it up a little bit.'”

Newman added a unique flair to his score, calling on renowned international drum corps The Blue Devils to contribute a definitively collegiate sound. The composer also incorporated concert band music to exemplify the feeling of being in school. In fact, said Newman, “There’s a little bit of Brahms’ ‘Academic Festival Overture’ when Mike is riding the pig. I like to think Brahms would be extremely flattered by his inclusion in the score.”

The score—recorded with a 112-piece orchestra—features a few character themes, including an accordion tune to help illustrate the less-than-cool status of the Oozma Kappa fraternity; a laidback shuffle to introduce Sulley; and the aspiring Scare student Mike Wazowski is often accompanied by a clarinet that, Newman notes, changes as Mike’s character arc evolves.

When Mike and Sulley find themselves in the midst of a fraternity party, filmmakers wanted to showcase their monster moves—but first they needed the music. Enter Axwell & Sebastian Ingrosso of Swedish House Mafia with a party song called “Roar”—of course—featuring an upbeat electronic dance sound that even monsters could appreciate. “We wanted to keep it funny, funky and at the same time a bit cool with a hint of monsters in it,” said Axwell.

Scanlon approved. “It’s really a fun song. I remember watching the animator work on this scene. As he played back the song, the artist at the next desk—who wasn’t even working on the movie—couldn’t help moving his feet. Obviously, that guy had been hearing that song for days, but yet the second he heard it, he just had to move his feet.”

Faced with the question of what a sweet monster might listen to during a free moment, filmmakers decided to push the envelope. “There is a great moment in ‘Monsters University’ when we thought it would be funny if the tunes were some of the most intense heavy metal imaginable. Mastodon was the obvious choice. They show off an unexpected monstrous side for one of our great new characters.”

They chose an existing song from the group called “Island.”

Opening in theaters in front of “Monsters University” is Disney-Pixar’s short film “The Blue Umbrella.” Directed by Saschka Unseld and produced by Marc Greenberg , the short features a score by composer Jon Brion , with vocals by singer/songwriter Sarah Jaffe (“The Body Wins,” “Suburban Nature”).

The director was listening to Jaffe’s music when he began work on the short. “There’s such an intimacy to her sound that touches you right at the core,” Unseld said. “I always thought hers would be the perfect voice to make people care deeply about a love story between two umbrellas.”

Brion, whose credits include “Eternal Sunshine of the Spotless Mind” and “Punch Drunk Love,” created a score that sublimely supports the wide-ranging emotional undertones of the short.

“You can see how Saschka sees things,” said Jaffe. “Everything has this life of its own. Objects in our everyday life are characters too. It’s really beautiful.”

The “Monsters University” soundtrack, set for release from Walt Disney Records on June 18, 2013, is available for pre-order at http://smarturl.it/musAmazona1. On June 4, the label will release the “Roar” digital single, plus remixes by Style of Eye and Yogi. The album’s track listing follows.

Ever since college-bound Mike Wazowski (voice of Billy Crystal ) was a little monster, he has dreamed of becoming a Scarer—and he knows better than anyone that the best Scarers come from Monsters University (MU). But during his first semester at MU, Mike’s plans are derailed when he crosses paths with hotshot James P. Sullivan , “Sulley” (voice of John Goodman ), a natural-born Scarer.  The pair’s out-of-control competitive spirit gets them both kicked out of the University’s elite Scare Program. To make matters worse, they realize they will have to work together, along with an odd bunch of misfit monsters, if they ever hope to make things right. Screaming with laughter and oozing with heart, Disney-Pixar’s “Monsters University” is directed by Dan Scanlon (“Cars,” “Mater and the Ghostlight,” “Tracy”), produced by Kori Rae (“Up,” “The Incredibles,” “Monsters, Inc.”) and features music from future Rock and Roll Hall of Fame inductee and award-winning composer Randy Newman (“Monsters, Inc.,” “Toy Story 3”). Check out disney.com/MonstersU, like us at facebook.com/PixarMonstersUniversity, and follow us on twitter.com/disneypixar. Rated G by the MPAA, the film opens in U.S. theaters on June 21, 2013, and will be shown in 3D in select theaters.