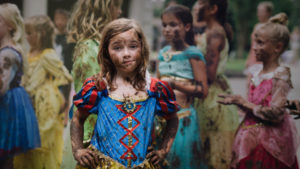 Alice Parker, 9, (pictured here) is a member of The Blasters soccer team. The Blasters are all about teamwork and toughness and don’t let anything, not even a little mud, get in their way.

Disney today unveiled a global photographic campaign in support of #DreamBigPrincess celebrating inspiring stories from around the world to encourage kids everywhere to dream big. Nineteen female photographers from fifteen countries have created a series of empowering images showcasing real-world girls and women, as part of Disney’s Dream Big, Princess initiative launched in 2016, which taps into the power of Disney Princess stories to inspire kids. Photographs will be shared on social media to help raise funds for Girl Up, the United Nations Foundation’s program supporting adolescent girls’ leadership and empowerment.

“The idea that stories, whether real life or fictional like those of Belle or Rapunzel, can inspire kids to follow their dreams is at the heart of the #DreamBigPrincess campaign,” said Jimmy Pitaro, Chairman, Disney Consumer Products and Interactive Media. “We asked some of the most accomplished female photographers to help tell the stories of inspiring women and girls from around the world—and the results are incredible.”

From one of the first female staff photographers at National Geographic to winners of the International Picture of the Year, World Press Photo Award for Nature, Commonwealth Photographer of the Year, and a finalist for the Pulitzer Prize for Breaking News, the accomplished roster of photographers bring a wealth of experience and talent. Each was challenged to find and document stories with the power to inspire kids.

With subjects including the youngest ever speaker at the UN; a gold-medal-winning Chinese Paralympian; the founder of the first female cycling team in Bamiyan, Afghanistan; a teenage author of a STEM coding book for kids; and a young surf champion from Brazil, the project aims to spotlight a diverse range of stories to connect with kids and families around the world. The images bring the #DreamBigPrincess message to life in a multitude of ways, including highlighting women who’ve achieved success in the face of adversity, young Girl Up Teen Advisors who’ve already helped make a positive impact on the world, and girls at play who illustrate the importance of imagination in childhood.

As well as inspiring kids with positive images and the stories behind them, the campaign aims to make a tangible difference for girls who face challenges in achieving their dreams, through its collaboration with Girl Up. From August 15-October 11, 2017, Disney Worldwide Services will donate US $1 for any public post of a photo using #DreamBigPrincess or like of such a post on Facebook, Instagram, or Twitter, for a minimum donation of US $500,000 and a maximum of US $1 million. Girl Up’s leadership program engages girls to take action and advocate for girls around the world, giving them empowering tools to help make a difference.

“Girl Up envisions a world where every girl can reach her full potential and be an advocate within her community for positive change and empowerment. The #DreamBigPrincess campaign is perfectly aligned with our goals, and we’re excited to partner with Disney and this incredible group of women to spotlight what it means to dream big around the world,” says Melissa Kilby, Director of Girl Up. 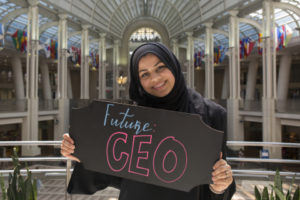 Girl Up Leader Miriam Farooq, 16 (pictured here), spends her time advocating for girls’ and women’s issues across Asia. The image is part of #DreamBigPrincess, a global photography campaign celebrating inspiring stories from around the world to encourage kids to dream big.

“Every picture tells a story, and I’m delighted to be part of an initiative that tells so many stories that are interesting and diverse. I hope that people around the world will be motivated to share their own inspiring #DreamBigPrincess images in support of Girl Up,” says Annie.

Girl Up Teen Advisor alumna Meg Schwartz was given the chance to follow her dream of becoming a professional photographer by creating images of Girl Up celebrity Champions, including YouTube influencers Brooklyn & Bailey, actress Katherine McNamara as well as philanthropist and actress Monique Coleman. Meg’s images will be shared as part of the campaign to help raise funds for Girl Up.

In 2016, Disney launched “Dream Big, Princess,” a campaign that encourages kids everywhere to dream big by highlighting key story moments and the inspiring qualities that each Disney Princess showcases through her adventures, such as Merida’s bravery, Cinderella’s kindness or Tiana’s perseverance. While each princess has her own unique and admirable qualities, what they all have in common is resilience and an ability to triumph over adversity to make their dreams come true. The Dream Big, Princess content series, which runs across Disney TV and digital networks globally, brings together a host of inspiring moments from beloved Disney movies with the stories of real-life young role models, who have dreamed big and achieved their goals to show kids what’s possible.

The Dream Big, Princess series has already reached millions of kids and families and the photographic campaign builds on this success by spotlighting women and girls from around the world with stories that have the power to inspire others.

Visit the Disney Princess Facebook page to support the campaign.