Mickey Mouse and a cast of beloved Disney characters will embark on a series of musical adventures through the magical powers of a sorcerer’s map in “Mickey and the Magical Map,” the all-new live show coming to the Fantasyland Theatre in Disneyland Park May 25. 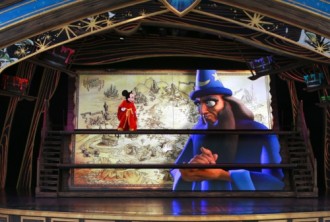 Mickey and the Magical Map

Created by Disney Creative Entertainment, “Mickey and the Magical Map” was conceived for children of all ages and represents the return of Disney storytelling to the newly refurbished Fantasyland Theatre, a venue that merges the tradition of live outdoor performances with theatrical technology.

“We’re very excited to welcome guests to the Disneyland Resort this summer to enjoy all the entertainment and attractions that make this a world-class, family vacation destination,” said Michael Colglazier , President of the Disneyland Resort. “We’re particularly thrilled to debut our captivating new show ‘Mickey and the Magical Map’ and to invite guests to experience Fantasy Faire, a new themed area with Disney Princess encounters and two live shows based on favorite princess stories.”

“Mickey and the Magical Map,” which can be experienced only at Disneyland, where the magic began, opens just in time for the family travel season. The Memorial Day weekend launches a Monstrous Summer of fun at the Disneyland Resort, which also features Disney Princesses at the new Fantasy Faire in Disneyland, and the spectacular new Cars Land and Buena Vista Street in the newly expanded Disney California Adventure Park.

Performed in the most magical of lands, Fantasyland, the new show reveals a mischievous Mickey Mouse .

“Each new show we create is a chance to push storytelling in a new direction,” said Michael Jung , Theatrical Development executive, Walt Disney Imagineering Creative Entertainment. “At Disney, we love the challenge of continuously looking at our classic tales and most recent stories to see how we can bring live entertainment and excitement to today’s audiences.”

“Mickey and the Magical Map” presents Mickey in his timeless role as the sorcerer’s apprentice. Wise sorcerer Yen Sid directs his Mapmakers, a singing-dancing ensemble cast that paints a wondrous map – capable of taking dreamers to any place imaginable and so large it spans the entire stage of the outdoor Fantasyland Theatre.

Apprentice Mickey lets his curiosity get the better of him and he stumbles upon the map’s magical powers, which take him, along with the audience, on a fantastic journey of imagination in the company of the Mapmakers. The journey, presented through theatrical stage wizardry, unveils wonderful worlds of music, color, adventure and beloved characters with each new direction – all set to an original song, “Journey of the Imagination,” and music from classic Disney films.

The show, scheduled for five daily performances this summer, comes alive with appearances and songs by King Louie from “The Jungle Book” (“I Wan’na Be Like You”), Pocahontas (“Just Around the Riverbend”), Mulan (“Reflection”), Rapunzel and Flynn Rider from “Tangled,” (“I See The Light”) Princess Tiana from “The Princess and the Frog” (“Dig a Little Deeper”), and Sebastian from “The Little Mermaid” (“Under the Sea”). Also included is the song “Hawaiian Roller Coaster Ride” from “Lilo and Stitch.”

The exciting show also complements the extensive variety of theatrical and live entertainment found at Disneyland Resort, including these: “World of Color,”  “Aladdin – A Musical Spectacular,” the Mariachi Divas and “Disney Junior – Live on Stage!” at Disney California Adventure, and “Fantasmic!,”  “Mickey’s Soundsational Parade,” the Laughing Stock Company at Golden Horseshoe Saloon, the Dapper Dans and Disneyland Band on Main Street, U.S.A., and the nightly summer fireworks show “Magical” at Disneyland.

Fantasyland Theatre, a classic Disneyland venue, was inspired by the original Fantasyland Theater (former spelling) which showed Disney cartoons and Mouseketeer footage from 1955 to 1964.  The current theatre debuted in 1985 as Videopolis, a dance location, which quickly drew crowds for stage productions including ” One Man ‘s Dream,” ” Dick Tracy Starring in Diamond Double Cross ,” “Mickey’s Nutcracker,” and one of Disney’s first stage productions of “Beauty and the Beast.”

In 1995, the venue was renamed Fantasyland Theatre with the debut of “The Spirit of Pocahontas.”  “Animazement – The Musical” enjoyed a popular three-year run and “Snow White—An Enchanting Musical” played for two years. The theatre was then converted to an area where guests could meet Disney Princesses.

“Mickey and the Magical Map” has writing by Carolyn Gardner and is directed by Tracy Halas .  The production designer is Steve Bass ; the creative director is Sylvia Hase ; the music is produced by Bruce Healey , supervised and arranged by Timothy Williams and supervised by Matt Walker .  The show producer is Ray Coble .