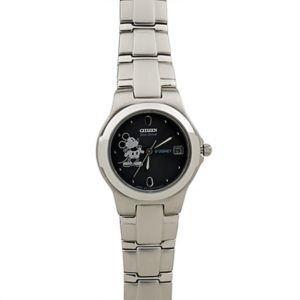 Citizen and The Walt Disney Company today announced that Citizen will be the Official Timepiece of the Walt Disney World Resort in Lake Buena Vista, Fla., the Disneyland Resort in Anaheim, Calif. and Marvel New Media’s Creative Space.

As part of the long-term promotional alliance, the Citizen logo will be displayed on the Main Street U.S.A. clocks in Magic Kingdom Park at the Walt Disney World Resort and Disneyland Park at the Disneyland Resort. The logo will also be featured on select FastPass clocks displaying return times for park attractions at both resorts. Additionally, the Walt Disney World Resort and the Disneyland Resort will begin offering Citizen timepieces featuring designs unique to Disney Parks.

This new relationship also names Citizen as the Official Timekeeper of runDisney race event weekends at Walt Disney World Resort, with race clocks bearing the Citizen logo at the beginning and end of the races, and a sponsor of Disney Dreamers Academy, which helps exceptional young people to dream big.

“Disney is honored to align with Citizen, a stalwart brand that has stood the test of time.” said Carlos Castro, vice president of Disney Corporate Alliances. “At Disney Parks, every minute is magic. So, it’s appropriate that our Guests will have access to one of the world’s greatest names in timepieces, as they celebrate their time together creating memories with friends and family.”

The promotional alliance also includes, for 2018, sponsorship of Marvel Minute and other digital content on Marvel.com that is in development at Marvel New Media’s Creative Space.

“Citizen is a company with a rich history of creativity and a dedication to exquisite craftsmanship, qualities that we, at Marvel, deeply admire,” Marvel senior vice president, Global Partnerships & Marketing Mindy Hamilton said.

As part of the promotional alliance, Citizen will also participate with Marvel in the 2018 San Diego Comic-Con, the largest comic book convention in the world. Citizen will have a significant branded presence within the event and create enjoyable moments that attendees will long remember.

“To engage with the legacy of the Disney Parks at such a vital time in their history, and Marvel with the blockbuster success of Marvel Studios’ ‘Black Panther’ and the much-awaited launch of Avengers: Infinity War, is a wonderful way to celebrate our 100-Year Anniversary,” said Jeffrey Cohen, President of Citizen Watch America.

This new promotional alliance also provides Citizen with worldwide music licensing opportunities, and with headquarters based in Tokyo, Citizen is also pleased that it will be a sponsor of the Disney On Classic concert series in Japan.

“It’s wonderful that great brands such as Citizen, Disney and Marvel can work together,” said Toshio Tokura, President and Chief Executive Officer of Citizen Watch Co Ltd. “We look forward to working with Disney on expansion of this alliance to their international parks and resort destinations.”