Bleacher Creatures To Launch New Line Of 10-Inch-Tall Plush Marvel Icons To Debut In May With Release Of Marvel’s Avengers: Age Of Ultron

HomeBleacher Creatures To Launch New Line Of 10-Inch-Tall Plush Marvel Icons To Debut In May With Release Of Marvel’s Avengers: Age Of Ultron
Jonathan
Disney News, Marvel
No Comments

Bleacher Creatures To Launch New Line Of 10-Inch-Tall Plush Marvel Icons To Debut In May With Release Of Marvel’s Avengers: Age Of Ultron 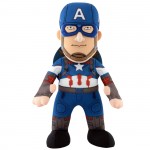 What’s the only thing more compelling than Nick Fury or the Black Widow in Marvel’s The Avengers? Incredibly true-to-life—and cuddly—10-inch-tall plush figure versions! Bleacher Creatures, the innovative licensing manufacturer known for its true-to-life plush figures of pro-sports stars and comic characters, will launch a brand-new line of Marvel plush figures in May with the release of Marvel’s Avengers: Age of Ultron. Other initial characters from the hugely anticipated film receiving the Bleacher Creatures plush treatment include Thor, Iron Man, The Hulk, Captain America and Hawkeye. The Bleacher Creatures Avengers plush will be available for pre-order starting April 1, and will be delivered by May 1, the movie’s premiere date.

Also in May, Bleacher Creatures and Marvel will debut plush figures from Marvel’s Ant-Man, the new Super Hero film starring Paul Rudd as a con man who finds his inner hero when he dons a suit that enables him to shrink in size but increase his strength.

Additional Bleacher Creatures/Marvel surprises, including characters from Marvel television series and comic-inspired characters, will launch in August and September 2015.

“We’re so excited to be working with the creative geniuses at Marvel as we transform their larger-than-life—or in the case of Ant-Man, smaller-than-life—Super Heroes into adorable yet faithful plush figures,” says Matthew Hoffman, founder and president of Bleacher Creatures. “Our motto is ‘Put your passion in play,’ and Marvel’s ingenious creations make that a thrilling reality.”