Back By Popular Demand Halloween At The Hollywood Bowl: ‘DISNEY IN CONCERT TIM BURTON’S THE NIGHTMARE BEFORE CHRISTMAS’ 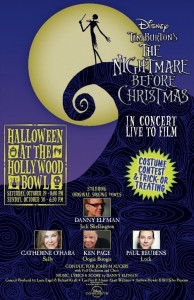 Back By Popular Demand Halloween At The Hollywood Bowl: ‘DISNEY IN CONCERT TIM BURTON’S THE NIGHTMARE BEFORE CHRISTMAS’

THIS IS HALLOWEEN: Los Angeles’ reigning Pumpkin King, Danny Elfman, will return to the Hollywood Bowl on Saturday, October 29 at 8:00 pm and Sunday, October 30 at 6:30 pm performing his role of Jack Skellington singing live to film for a very special screening of Disney’s timeless holiday classic, “TIM BURTON’S THE NIGHTMARE BEFORE CHRISTMAS.” Elfman will be joined by other original cast members including Catherine O’Hara (Sally), Ken Page (Oogie Boogie) and Paul Reubens (Lock). Tickets go on sale Friday, September 9 at 10:00am via all Ticketmaster outlets. To purchase by phone call (800) 745-3000 or online at www.Ticketmaster.com

Danny Elfman, who wrote the film’s songs (music and lyrics), composed its original score and was the original singing voice of Jack Skellington says, “Being able to perform ‘Nightmare’ live last year, in synch to the movie with a full orchestra was such a thrill. But having Catherine O’Hara, Ken Page and Paul Reubens to perform with me really made it a unique and magical experience. I’m happy to bring it to our amazing Los Angeles audience one more time.”

Catherine O’Hara, the original voice of Sally adds, “I’m proud to once again be part of such a fun evening celebrating Danny’s musical genius.”

The original voice of Oogie Boogie, Ken Page says, “There is nothing that I can compare with stepping out onto the Hollywood Bowl stage to a sold out house with the great LA musicians playing Danny Elfman’s brilliant score of THE NIGHTMARE BEFORE CHRISTMAS and happily recreating OOGIE BOOGIE’S song ‘LIVE’… except doing it again!”

Paul Reubens adds, “The thrill from last Halloween of being onstage at the Hollywood Bowl singing with Catherine O’Hara and Danny Elfman has lasted a whole year! Of course I’m back!”

Last year’s NIGHTMARE AT THE BOWL was named “#1 Concert of 2015” by the Orange County Register beating out such shows as The Foo Fighters, Janet Jackson, Garth Brooks, Shania Twain, Willie Nelson, Neil Young and The Rolling Stones.

Not since Elfman’s iconic Oingo Boingo Halloween concerts have his fans been offered such a holiday treat.

HALLOWEEN AT THE HOLLYWOOD BOWL- TIM BURTON’S THE NIGHTMARE BEFORE CHRISTMAS- IN CONCERT LIVE TO FILM will transform this legendary venue into Halloween Town with special pre-show activities including an audience participation costume contest, unique photo opportunities and trick-or-treating stations. Tim Burton-inspired costumes are encouraged.

First released in 1993, Tim Burton’s THE NIGHTMARE BEFORE CHRISTMAS was directed by Henry Selick (JAMES AND THE GIANT PEACH), and based on a story and characters by Tim Burton. The film follows the earnest-but-misguided adventures of Jack Skellington, Halloween Town’s beloved Pumpkin King, as he attempts to take over the Christmas holiday. Against the advice of Sally, a lonely rag doll who has feelings for him, Jack enlists three mischievous trick-or-treaters – Lock, Shock, and Barrel – to help him kidnap Santa Claus. The film is rated “PG”.

DISNEY IN CONCERT TIM BURTON’S THE NIGHTMARE BEFORE CHRISTMAS is produced under license by Disney Concerts, a division of ABC Inc. Disney Concerts currently licenses 14 different concert packages including Fantasia, Pixar In Concert, Alice In Wonderland, Frozen, Ratatouille, The Pirates of the Caribbean series (episodes I-IV), and Silly Symphonies, which last year accounted for approximately 325 performances in some of the world’s top venues, including Lincoln Center, Royal Albert Hall, Sydney Opera House, Tokyo Forum and the Hollywood Bowl.

All acts and ticket prices subject to change without notice.

Know Before You Go: www.hollywoodbowl.com/lease for parking information.