“Alexander And The Terrible, Horrible, No Good, Very Bad Day” Soundtrack Available In The U.S. October 7 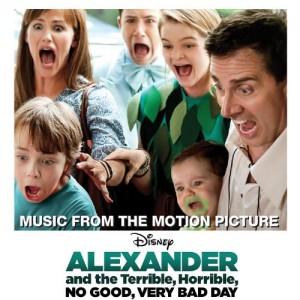 “Alexander And The Terrible, Horrible, No Good, Very Bad Day” Soundtrack Available In The U.S. October 7

“Alexander and the Terrible, Horrible, No Good, Very Bad Day” hits theaters Oct. 10, 2014, with a soundtrack that includes an original end-credit song from The Vamps, plus original songs from two of the film’s stars and score by Christophe Beck (“Frozen,” “The Hangover”). The six-song EP will be released in the U.S. by Walt Disney Records on Oct. 7, 2014; pre-order begins today.

British pop rock band The Vamps was called on to write and perform the end-credit song “Hurricane.” The group filmed a music video for the song that features a cameo by Bella Thorne, who stars as big brother Anthony’s uptight girlfriend Celia in the film. A sneak peek of the video will debut on Disney Channel Sept. 12, 2014, followed by the full video premiere on VEVO. Director Miguel Arteta (“The Good Girl,” “Cedar Rapids,” “Youth in Revolt”) says it was The Vamps’ optimism that drew him to the group. “We wanted people to know that it’s okay to have bad days—you can be stronger and better for it,” says Arteta. “The Vamps’ energy gets that across wonderfully!”

According to the director, Beck’s score sets the pace for the film. “Chris Beck loved the honesty in the film with regard to what it’s like to raise a family and how hectic that can get at times,” says Arteta. “He added a genuine life beat to the whole film. When the troubles for the family start, you can almost hear Chris’ score going ‘Oh noooo!’ It feels like honest mayhem in an incredibly fun way.”

Dylan Minnette, who plays Anthony in the film, teamed up with Braeden Lemasters to write the song “Surf Surf Don’t Drown,” which is performed by Minnette’s band The Narwhals and appears in the film as the family rushes to get sister Emily to her play. “I love The Narwhals and ‘Surf Surf Don’t Drown’ was the perfect message for our film,” says Arteta. “When the world throws a tsunami of bad luck your way, it’s best to go with the energy and try to rise above it.”

Kerris Dorsey gained recognition in “Moneyball” for her performance of the acoustic song “The Show” in that film. Dorsey, who portrays big sister Emily in “Alexander,” wrote and performed the song “Best Worst Day Ever” along with her sister Justine Dorsey. The song can be heard during the credits. “I love Kerris and Justine’s voices,” says Arteta. “I heard them play together and knew it would be fantastic to have them on the soundtrack. I’m so impressed with the song they wrote. It has such a feeling of being able to beat the bad odds that life hands you.”

“When you are having a bad day, you can feel singled out, as if fate has brought a huge hand down and pointed its finger at you at all day,” continues Arteta. “Wherever you look up, there it is, singling you out. We wanted the music in Alexander to have this incessant feeling to it—like this madcap pulse has gotten a hold of you and won’t let up until the family beats the odds and has the wonderful party for Alexander in the end!”

1. Hurricane written and performed by The Vamps

2. Best Worst Day Ever written and performed by Kerris Dorsey and Justine Dorsey

3. We Are The Ones (Own The World) performed by Charles William

6.Suite from “Alexander and the Terrible, Horrible, No Good, Very Bad Day” by Christophe Beck