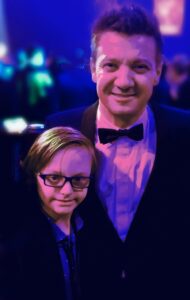 Guion The Lion, an inspirational children’s book that celebrates the differences in all children through a colorful and exciting journey, is now available on Audible just in time for World Down syndrome Day. Actor and singer Jeremy Renner, best known for playing Hawkeye in the Marvel Cinematic Universe films, has volunteered to narrate the highly praised book after meeting author Rebecca Wilson Macsovits and her son Guion, who happens to have Down syndrome, at the Avengers: Endgame premiere. Guion, who is also the inspiration behind the book, formed a connection with the actor, making it a natural step for Renner to lend his voice to the project.

“Guion is a role-model. When we met, I knew he was an incredible young man and I instantly connected with him. When I found out that he was the idea behind his mother’s children book, Guion The Lion, I knew it was going to be special, and it certainly was,” says Jeremy Renner. “The book is all about accepting our differences, which is something that we really need to teach our children at a young age. I hope that I can help further this important message by lending my voice to this project and encourage everyone to stop, listen and accept each other for who we are.”

Over the course of more than 20 years, Renner has established himself as one of Hollywood’s most versatile and respected actors. Throughout the 2000s, he appeared largely in independent ﬁlms including “Dahmer” and “Neo Ned“. Shortly thereafter he began starring in blockbuster ﬁlms including “The Hurt Locker” (Academy Award nomination for Best Actor) and “The Town” (Academy Award nomination for Best Supporting Actor) as well as starring in “Mission Impossible” alongside Tom Cruise, “The Bourne Legacy” and originating the role of “Hawkeye” in the “Avengers” series. Jeremy also starred in the award-winning movies “American Hustle” & “Arrival” and in the critically acclaimed picture “Wind River”. Most recently, Jeremy reprised the roll of Hawkeye in the top box office movie of all time, “Avengers Endgame”. He will next be seen starring in “Hawkeye” for Disney+ and “Mayor of Kingstown” for Paramount+. Renner is also an accomplished singer & pianist.

Guion The Lion book follows the adventures of an imaginative little lion who sees things a little differently from his friends. Full of whimsical delights, discoveries and beautiful watercolor illustrations, this book teaches children that appreciating individual differences and embracing others’ ideas can lead to unimaginable adventures and endless fun. The book launched in 2020 to rave reviews and topped Red Tricycle and BUZZFEED must-read lists.

Parents can also download the Guion The Lion song and watch with their children the Guion The Lion Official Lyric Video, which is available now on YouTube  as well as on Amazon Music and iTunes and more than 600 streaming platforms.

Since their initial encounter, Renner and Guion continue to stay in touch. “We are so honored and grateful to work with Jeremy and his team on this project. The level of commitment and passion to further the book’s message is remarkable and humbling,” concludes Rebecca Wilson Macsovits, author and entrepreneur.