A Look at Vintage Robin Hood at the Magic Kingdom 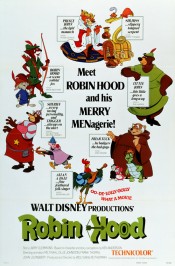 Well it’s November 8th and a film that I love ever so much was released in 1973 today, Walt Disney’s Robin Hood. This 23rd animated classic just really nails the the fun and fancy in a Disney film.

“The film is narrated by the rooster Alan-a-Dale, who explains that Robin Hood and Little John live in Sherwood Forest, robbing from the rich and giving to the poor townsfolk of Nottingham. The Sheriff of Nottingham and his posse often try to catch the two but fail every time. Meanwhile, Prince John and his assistant Sir Hiss, arrive in Nottingham. Sir Hiss hypnotised Prince John’s brother King Richard to go off on the Crusades, allowing Prince John to take the throne. Unfortunately, the prince is greedy and immature, even sucking his thumb whenever his mother is mentioned. Robin and Little John rob Prince John by disguising themselves as fortune tellers, prompting the prince to put a bounty on their heads and makes the Sheriff his personal tax collector.”

This film was produced on a very small budget and some of the animated scenes were even traced from other feature films like The Jungle Book, Snow White and Aristocats.

The music in the film is very enjoyable with songs like:

There never has been a full CD release for the film, but an LP from 1973 that was initially issued does contain all the songs, score and dialogue from the film.

To further enjoy the film and its’ release today, in 1979, the Walt Disney World Magic Kingdom welcomed Robin and his Gang for a nice photo opp.

So pass on this family favorite film and enjoy some Oo De Lally fun. 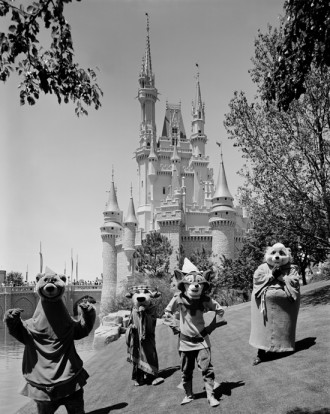