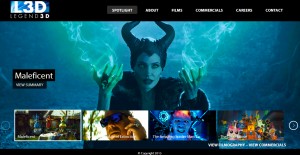 Legend3D, Inc., a market-leading 3D visual effects and conversion company, has been formally awarded four major tentpole conversions from multiple studios, booking feature conversion and 3D VFX work out through June of 2016. In addition to the feature films currently in production at the facility, Legend is also in final negotiations on three other full feature conversions during 2015 and 2016. These films will utilize Legend’s new proprietary depth grade node and real-time conversion pipeline, and most of them will be hubbed and conformed at Legend’s Hollywood 3D Editorial Facility.

“By doubling our capacity to over 400 artists and production staff through an expansion into our new Canadian facility, and by adding the real-time depth process which gives filmmakers ultimate creative control for their films, we are now achieving all three facets of the elusive VFX triad: quality, speed and competitive pricing,” said Matt Akey, EVP of Production for Legend. “Filmmakers have been excited to utilize our real-time system on their upcoming films, like a ‘DI for conversion’, finishing multiple sequences of conversion with them in one sitting.”

“The amount of 3D conversion coming up in 2015 and 2016 is astounding, we’ve now become a 3D facility that can say ‘yes’ to the needs of our studio clients in terms of manpower and pricing. Since conversion is now the 3D technique of choice for most directors, we are excited that there’s more opportunity for stereoscopic storytelling in 3D than any year prior,” said Jared Sandrew, CCO at Legend. “The features we’ve been awarded over the past weeks have been a testament to the creative partnerships we’ve formed over the past few years, and there’s a ton of momentum.”

In addition to 3D conversion, Legend is also providing additional services as part of their package on these films, such as on-set supervision, 2D VFX services and 3D conform/editorial services. The Company has recently partnered with Sony, Columbia and Tristar Pictures, Marvel Studios, MGM, Lionsgate, Warner Brothers, Paramount, Walt Disney Pictures, and BBC Films on high-profile features, including Transformers: Age of Extinction, The Amazing Spider-Man 2 and Maleficent with a number of 2015 tentpole projects completed and premiering soon.