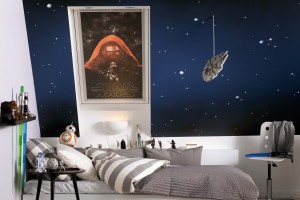 December 2015, a new chapter adds to the Star Wars universe with the world premiere of “Star Wars: The Force Awakens”. The launch of the film not only brings a seventh chapter to the epic saga; it also takes the existing collaboration between Disney and the VELUX Group, the world’s largest manufacturer of roof windows and accessories, to a new galaxy. The “Star Wars & VELUX Galactic Night Collection” offers four galactic blackout blinds designed especially for children’s rooms to stimulate rest and creativity, which are vital for future generations and at the core of the VELUX Group.

The VELUX Group was founded in 1941 with a vision to bring light and fresh air to modern homes. 74 years and millions of roof windows later, the company is today a market leader with an ongoing ambition to shape spaces supporting individual needs for daylight in every room of the house. And this includes children’s rooms, which today have changed focus from being bedrooms to playrooms and as such call for increased creativity and functionality when decorating.

In 2014, the high involvement in children’s rooms led the VELUX Group to a playful and powerful collaboration with Disney featuring some of the most beloved Disney characters. Now the time has come to widen the scope and cater for the imagination of even more children with a Star Wars-themed blinds collection. The “Star Wars & VELUX Galactic Nights Collection” is inspired by Star Wars:“The Force Awakens” and features four brand new fabulous designs designed exclusively by the VELUX Group in close alignment with Disney.

As market leader, the VELUX Group insists on being innovative and agenda setting whenever new products are developed and launched. Not only in terms of functionality and quality but also relevance. Several studies point at sleep as a vital factor in the healthy home and this has led to an increased demand for blackout blinds to suit all ages. With this in mind, the VELUX Group is happy to present the “Star Wars & VELUX Galactic Night Collection”, a collection, which expands the VELUX kids’ selection while linking the company to one of the world’s most epic universes; Star Wars. Kent Holm, Vice President of Global Product Management at the VELUX Group explains:

“When the VELUX Group engages in design collaborations, we aim to push the boundaries in the market and provide the consumers with ideal solutions for the entire household. Looking to the enormous power and popularity of Star Wars, we found the perfect collaboration for developing new products aimed at kids and preteens, who are old enough to be decision makers in their own room without compromising on the functionality and quality their parents expect. With the “Star Wars & VELUX Galactic Night Collection” we aim to inspire epic play battles between good and bad during daytime while guaranteeing total blackout of light which is essential for a good night’s sleep”.

“Star Wars & VELUX Galactic Night Collection” is an opportunity for both children and their parents to engage in a high benefit product, since the Star Wars universe has devoted fans at all ages and offers a unique community of massive universal popularity.

Collection from another galaxy to the modern playroom

Star Wars is set in a galaxy far, far away. The “Star Wars & VELUX Galactic Night Collection”, on the other hand, is designed especially for modern playrooms with individuality in mind.

The collection comprises four Star Wars designs, two depicting classic characters and universes, “Darth Vader” and “The Death Star”, and two inspired by The Force Awakens, “Kylo Ren” and “Robots”. Every design brings the characters to life on a “poster design” in full roof window size. Whether you are the hero or the dark force, the total blackout blinds give you full control of light allowed into the room during daytime and nighttime.

The collection also offers a perfect plug-and-play solution, which is easy to install thanks to the VELUX Pick&Click!™ technology.

The “Star Wars & VELUX Galactic Night Collection” is up for pre-order from December 2015 at www.velux.com