Thoughts on Disney Springs? The Future of Downtown Disney? 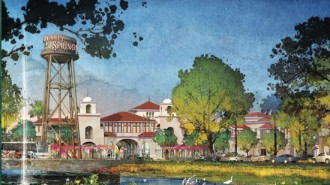 Concept for Disney Springs as part of Downtown Disney

Unlike the changes to Disney’s California Adventure and the much-discussed Fantasyland Expansion, Disney Springs will completely change the landscape of Downtown Disney, making it almost new.  The idea is to recreate and unify Downtown Disney in the style of an old Florida town, like the kind settlers founded around natural springs.  The three sections of Disney Springs will consist of the Marketplace, Westside and the Landing.  The Marketplace and the Westside retain their original names, while the Landing replaces what remains of Pleasure Island.

When P.I. was originally dismantled, Disney announced plans to replace it with a new section called Hyperion Wharf. All that developed from this was a restaurant, Paradiso 37. Eventually these plans drifted away, likely because Disney Springs was being considered.

When it is completed in 2016, Disney Springs will not only double the number of shops and restaurants Downtown Disney currently provides; it will create an unparalleled experience for anyone looking to relax and explore the free side of Disney.

The question is, is this the wisest use of Disney’s time and money?

California Adventure is finished.  The Fantasyland Expansion is in it’s final process with the Seven Dwarfs Mine Train a little over a year from completion.  Demand is high on Disney to create more attractions based on the acquisitions of Pixar, Marvel and Lucasfilm. And in light of the continuing evolution of Universal Studios, including the Wizarding World of Harry Potter, the London expansion and the Transformers 3D ride among others, Walt Disney World actually has some true competition.  Is Downtown Disney, already beloved by Disney fans, truly this in need of a redesign?

It is unlikely Disney will embark on multiple major projects simultaneously.

The project will also be a strain on Downtown Disney.  Part of the expansion will be into Downtown Disney’s already easily-filled parking lot. Part of the plans for Disney Springs include a multi-level parking garage, but until then, many guests will have to consider other options. This is more than just a minor inconvenience when parking spots fill. This may result in less people shopping and eating at Downtown Disney.  While the concept art is gorgeous, does Disney truly need an Apple Store, MAC make up and a Food Network restaurant that badly?

If there is one non-park experience that needs consideration, its a nightlife. While Disney had a number of reasons for shutting down Pleasure Island, the fact remains that Night time entertainment in Walt Disney World is lacking.  Pleasure Island is sorely missed.  And while it is unlikely we will see the return of P.I., more of a night scene akin to Jellyrolls (located in Disney’s Boardwalk area) or even just something along the lines of Motions (former dance club in P.I.) would be a wise investment for adults who wish to have fun in a kid-free environment.

In the end, Disney Springs will be a wonderful addition to the Walt Disney World landscape. But for now, it just isn’t the droids we’re looking for.