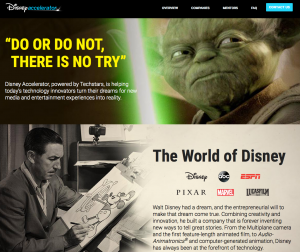 The companies selected for the 2015 Disney Accelerator program include:

“Last year’s Disney Accelerator exceeded our expectations on many fronts,” said Kevin Mayer, Chief Strategy Officer of The Walt Disney Company. “We are excited to roll up our sleeves again this year and help these cutting-edge startups achieve their goals.”

Participants receive up to $120,000 in investment capital to develop their ideas, along with mentor support from top Disney executives, including Chairman and CEO Robert A. Iger, and leaders from Pixar, Marvel, Lucasfilm, ESPN and Walt Disney Imagineering, among others. Mentors will also include other entertainment industry leaders, venture capitalists, and Techstars’ extensive network of entrepreneurs, investors and executives.

The startups from the 2014 Disney Accelerator have reached many milestones since completing the program. All of the startups have either raised capital, been acquired or become profitable since the end of the Accelerator and many of the participating companies have launched products and programs in conjunction with The Walt Disney Company:

For more information on both the 2014 and 2015 Accelerator programs, please visit: http://DisneyAccelerator.com