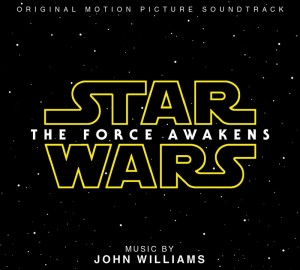 The original motion picture soundtrack for the record-breaking Star Wars: The Force Awakens, featuring new score conducted and composed by five-time Academy Award®-winning composer John Williams, has entered the Billboard 200 chart at No. 5, scanning over 100,000 equivalent album units in its first week of release, according to Nielsen SoundScan. The last and only all-score soundtrack to debut in the Top 5 was Star Wars Episode I: The Phantom Menace in 1999.

From Lucasfilm and visionary director J.J. Abrams, Star Wars: The Force Awakens has broken numerous box office records, most recently becoming the fastest film to reach $1 billion globally, a feat it accomplished in 12 days with over $540 million domestically and $550 million internationally. It posted the biggest debut in industry history with $248 million domestically and $529 million globally in its first weekend, as well as the biggest second weekend of all time domestically with $149.2 million.

Oscar®-winning composer John Williams’ ubiquitous Star Wars “Main Title” theme has become part of popular culture since it was first heard accompanying Star Wars: A New Hope in 1977.  It is no surprise that Williams’ orchestral compositions for Star Wars are among the most beloved and recognizable themes in cinematic history, from the classic “Main Title” theme introduced in Star Wars: A New Hope to the ominous “Imperial March” from Star Wars: The Empire Strikes Back to the stirring “Duel of the Fates” from the prequel trilogy.

After creating the scores for all six of the previous Star Wars films, Williams returns to compose and conduct his signature sweeping music for The Force Awakens.

Williams, whose career spans over six decades, has won five Academy Awards® and he has scored some of the most popular and critically acclaimed films of all time, including Jaws, the Indiana Jones franchise, the first three Harry Potter films, E.T. The Extra Terrestrial, Lincoln, Schindler’s List, and countless others.

The soundtrack for Star Wars: The Force Awakens is now available wherever music is sold (http://smarturl.it/swtfa).

Spotify is matching Star Wars fans’ character-inspired playlists based on their music tastes. Users and non-users alike can be matched up with a character playlist by going to http://smarturl.it/SWTFASpotifyMatch.