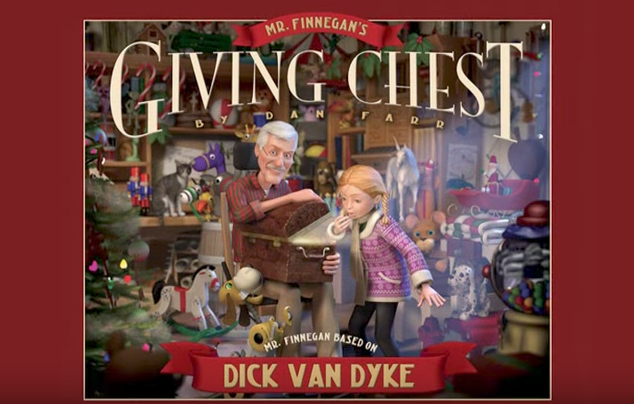 Van Dyke is an actor, comedian, singer, dancer, producer and writer. Van Dyke has starred in some of the most iconic films of our generation, including Disney’s Mary Poppins, Bye Bye Birdie, Chitty Chitty Bang Bang and the Night at the Museum series. In addition to his movie roles, Van Dyke also starred in a number of hit TV shows, most notably The Dick Van Dyke Show and Diagnosis Murder.

Over the course of his career, Van Dyke has won five Emmy awards, a Tony and a Grammy. In 1995 he was inducted in the Television Hall of Fame. Additionally, Van Dyke has been named a Disney Legend, has a Star on the Hollywood Walk of Fame and in 2013 he received the Screen Actors Guild’s Lifetime Achievement Award.

In 2005, Van Dyke and Salt Lake Comic Con Founder and Show Producer Dan Farr collaborated on a Christmas book, Mr. Finnegan’s Giving Chest. Farr wrote the book and Van Dyke narrated an audio CD. In the book, Mr. Finnegan (Van Dyke) is no ordinary toymaker. His providential meeting with Maggie, a resentful girl who doesn’t believe in the magic of Christmas, is the beginning of a series of miracles that will change her heart forever.

“People ask me all the time who my dream guest is and I always tell them the same thing, Dick Van Dyke,” said Farr. “I’ve had the privilege of working with Mr. Van Dyke in the past when we partnered on our Christmas book, Mr. Finnegan’s Giving Chest, and he is a real pleasure to be around. Mr. Van Dyke does very few comic cons, so our fans are in for a special, once in a lifetime fanXperience.”

“There will be a lot of our fans excited about Dick Van Dyke. People have been asking for him specifically, ever since our first event. I’m thrilled that we have the kind of reputation that continues to attract this caliber of guest and make our fans dreams come true,” said Bryan Brandenburg, Salt Lake Comic Con Co-Founder and Chief Marketing Officer. “We’re constantly innovating new ways to deliver the fanXperiences our attendees want and make this a favorite comic con destination for Hollywood legends like Dick Van Dyke. Our Fifth Annual Salt Lake Comic Con is going to be our best one yet.”

Salt Lake Comic 2017 will be held Sept. 21-23, 2017 at the Salt Palace Convention Center. For more information or to buy your ticket(s) now visit, http://www.saltlakecomiccon.com/.