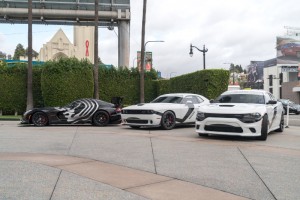 The weekend before “Star Wars: The Force Awakens” opens in theaters worldwide, Dodge is taking to the streets of greater Los Angeles with a team of specially wrapped Dodge vehicles to give fans the opportunity to take photos and videos with them.

Star Wars and Dodge fans can track vehicle locations in real time on Twitter, using the hashtags #Dodge and #TheForceAwakens, and see the brand’s daily fan favorites on the Dodge Facebook and Instagram pages.

Dodge is launching the weekend promotion in celebration of the upcoming release of “Star Wars: The Force Awakens,” in theaters worldwide December 18.

Lucasfilm first announced in August that it was collaborating with FCA US and six other global brands to promote “Star Wars: The Force Awakens.” In November, the FIAT brand displayed a custom-painted Fiat 500e Stormtrooper, inspired by the armor of the First Order Legion, at the L.A. Auto Show.