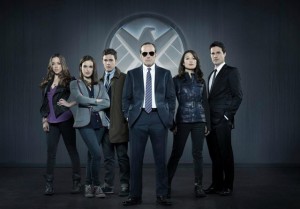 We’re excited to announce that Marvel’s Agents of S.H I.E L.D. – The Complete First Season, will arrive on DVD and Blu-Ray September 9th!  Join Agent Coulson and his special ops team on a thrilling adventure that embarks in the wake of the Battle of New York. As they investigate the unknown, many questions affecting the entire Marvel Universe are brought to life, such as, “Who is ‘The Clairvoyant’? What is Hydra’s sinister master plan; what dark secret lies behind Skye’s puzzling origins, and most importantly of all, who can be trusted?”

Not only is Agents of S.H.I.E.L.D. an amazing stand alone show, its storylines are also sure to be linked to future Marvel blockbusters. The latest Captain America feature, The Winter Soldier, had an exciting tie-in to the last few episodes of S.H.I.E.L.D., so be sure to look forward to the future of this storytelling tactic.

Full of special features, Marvel’s Agents of S.H I.E L.D. – The Complete First Season, is the perfect gift for any Marvel fan.  Along with 22 action-packed episodes, enjoy a Journey into S.D.C.C., Marvel Studios: Assembling a Universe TV Special, 5 Behind the Scenes Field Reports, audio commentaries, and more, all available on Blu-Ray and DVD September 9th!